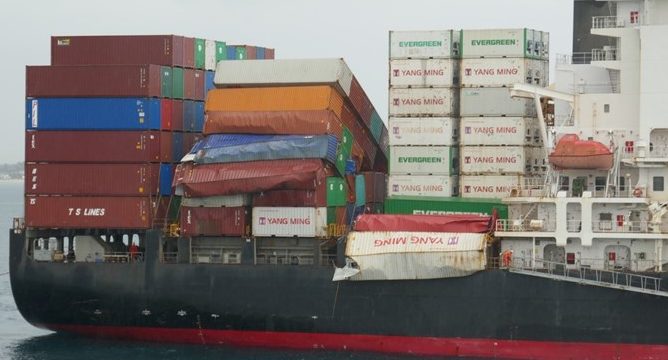 The AMSA led operation to recover containers lost from the YM Efficiency off the NSW coast is complete. On 8 May the vessel MV Pride returned to Port of Newcastle for the final time to discharge containers and pollution recovered from the ocean floor.

The recovery operation began on April 3 and has seen 63 containers and tonnes of associated pollution successfully recovered from the ocean.

AMSA’s General Manager of Response Mark Morrow said that the operation has been a complete success.

This project was forecast to take a month and was done in 35 days, including 7.5 days of delay for weather. Additionally, although originally expecting 60, AMSA have recovered 63 containers.

In December 2019, AMSA signed a contract with Ardent Oceania to conduct the clean-up operation.

Ardenth used a custom manufactured steel basket which was lowered to the ocean floor where remotely operated underwater vehicles assisted in transferring the containers and associated rubbish into the basket to be brought on board the ship.

The offshore construction vessel MV Pride made four trips to port to discharge the recovered containers, which were processed at a specially constructed facility and recycled where possible.

The final six containers will now be processed at the facility within Port of Newcastle operated by AVCON projects before the site is decommissioned.

The total cost of the recovery operation to remove and dispose of 63 containers is about $17 million, which, unless recovered, will be funded from levies collected from the shipping industry.

Since this pollution event took place in June 2018 AMSA has attempted to engage with the Taiwanese owners of the YM Efficiency, Yang Ming, about their ongoing responsibility to remove the remaining containers from the seafloor.

AMSA’s Chief Executive Officer Mick Kinley said that this operation has finally exposed Yang Ming and their insurer’s arguments against removing this pollution as nonsense.

Yang Ming are out of excuses and they should pay up

AMSA has started legal proceedings in the Federal Court to recover all costs associated with the recovery operation from Yang Ming and their insurers.