Yara Birkeland delivered to its owners 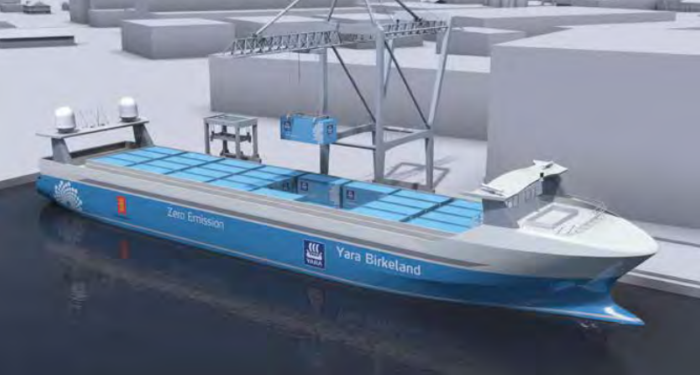 Vard announced that it delivered the world’s first all-electric autonomous container ship, the Yara Birkeland, to its owners Yara International.

The hull was built by Vard Braila in Romania. Initially, the plan was for Vard Brevik to outfit and deliver the vessel, but this was then transferred to Vard Brattvaag, as Vard said.

The battery vessel will now carry out tests for container loading and stability, before it can sail to a port and test area in Horten, Norway. Once there, it will be further prepared for autonomous operation.

Yara Birkeland was one of the most eagerly anticipated vessel launches of the year. However, because of the pandemic and unsees complexities, the autonomous vessel is tipped to launch next year.

Namely, getting the landside operations in place proved to be much more difficult thatn originall anticipated from every side, including order receipts, production, packing, transport to the ship, and loading and unloading containers.

As Mr. Holsether admitted, the company indeed underestimated the complexity of such a project. Nevertheless, Ketil Olaf Paulsen, director of technology and development at Kongsberg Maritime, explained that they have a fully finished ship that is designed as autonomous, and the company can start testing under realistic conditions.

During an interview to Norwegian media, Yara boss Svein Tore Holsether sneaked a hint that the much-awaited autonomous vessel could launch next year.