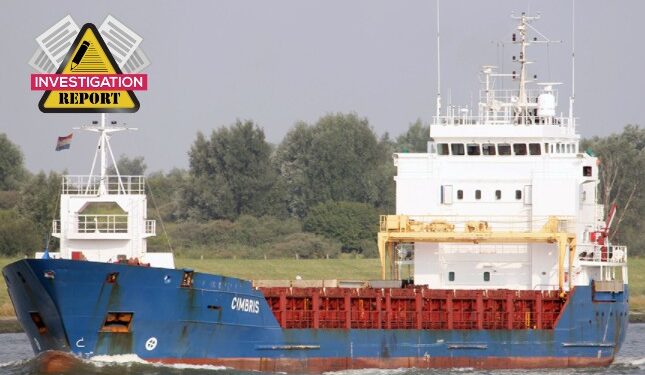 UK MAIB published its investigation report into a fatal accident on board the Gibraltar registered general cargo vessel Cimbris at Antwerp, Belgium on 14 July 2020.

A port stevedore on board the Gibraltar registered general cargo vessel Cimbris was fatally crushed when he became trapped between the vessel’s gantry crane and a cargo hatch cover during cargo discharge operations at the Antwerp Bulk Terminal, Belgium.

No one saw the stevedore position himself between the moving gantry crane and the hatch cover, but his likely intent was to assess the progress being made by his team working in the hold.

The chief officer did not have a full view of the crane’s path from his control position and, contrary to the vessel’s documented procedures, a second crew member was not used to act as a lookout or banksman.

The hatch cover lifting operation was not properly planned, adequately supervised, or executed in a safe manner. Communication between the ship’s crew and port stevedores was poor and the safety culture demonstrated by both was weak.

In light of the situation, the following recommendations have been made to Briese Dry Cargo GmbH & Co. KG and Centrale der Werkgevers aan de Haven van Antwerpen: