Another incident in Singapore Strait makes a total of six incidents in the region in 2021.

The incidents were classified as CAT 3 and CAT 4 (least significant where the perpetrators were not armed, and the crew not harmed), respectively.

The Centre also urges the littoral States to increase patrols and enforcement in their respective waters, strengthen coordination among them and promote information sharing on the latest situation and the criminal groups involved in order to make arrests of the perpetrators. 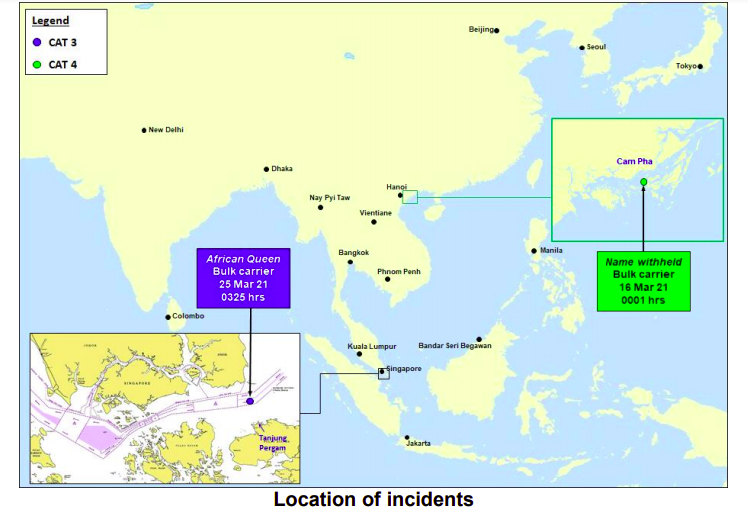 Shortly after, the ship’s alarm was raised and the crew mustered, while a search onboard was conducted. At 0405 hrs, the master updated Singapore VTIS that the search was completed with no further sighting of the perpetrators onboard.

Engine spares including valve rotator, valve seat exhaust, valve seat suction, valve guide, suction valve, exhaust valve chrome plating and plunger assembly were stolen, but the crew was safe. The master did not require any assistance and continued the voyage.

A safety navigational broadcast was initiated. The Republic of Singapore Navy’s (RSN) Maritime Security Task Force (MSTF) and Singapore Police Coast Guard were notified. In addition, information about the incident was shared with the Malaysian and Indonesian authorities.

While at anchor in the early morning hours of 16 March, the master’s and second officer’s cabins were damaged and some cash was stolen.

A search was conducted with no perpetrator found, and the crew was safe. The incident was assessed to have occurred between 0001 hrs and 0600 hrs. The master reported the incident to the local authorities and the Company Security Officer (CSO). Meanwhile, the local immigration police boarded the ship and investigated the incident.

While underway on 22 March, the second officer observed a 17m grey-hulled skiff with three armed perpetrators onboard approaching from the vessel’s port side. The general alarm was raised. An emergency broadcast via Ch 16 was made. The ship horn was blown continuously and evasive measures were taken. The skiff then steered away at about 1320 hrs. The emergency broadcast was picked up by a nearby European Missionary Warship which escorted the ship safely to Mina Saqr Anchorage, UAE.