Misinterpretation of navigational information led to the grounding of the Royal Canadian Marine Search and Rescue (RCMSAR) vessel 'Spirit of Sooke' near Sooke, British Columbia, said the Transportation Safety Board of Canada (TSB) in its investigation report on the incident.

On 7 February 2019, at approximately 2000 PST, the Spirit of Sooke, a rigid hull inflatable jet boat departed RCMSAR Station 37 in Sooke, B.C., with a coxswain in charge, one crew member and two new crew members onboard. The boat was heading to the fueling station in the Sooke Basin, using the trip as an opportunity for training the new crew members in navigation and communications procedures.

The crew started the return trip to Station 37 at approximately 2115, with the crew member at the helm and the coxswain navigating. The new crew members were assigned to maintain lookout based on their experience level.

As the vessel approached Christie Point, the coxswain monitored the radar display and instructed the crew member at the helm to make a course alteration. Seconds later, the coxswain urgently shouted the same course change. Almost immediately, at approximately 2134, the Spirit of Sooke ran into shoreline rocks on Christie Point at a speed of about 27 knots.

The vessel launched into the air and hit the ground stern first before sliding along the shore for approximately 25 metres and coming to rest on its starboard side, resulting in the crew members being thrown around the cabin in a violent manner and causing serious injuries.

The investigation also established that if organizational guidance is not sufficiently detailed to assist crews in determining safe speed, there is a risk that the speed selected may not be appropriate for prevailing conditions,

Immediately following the occurrence, operations at RCMSAR Station 37 ceased and a return-to-operations plan was initiated. Refresher training sessions for coxswains were held including an evaluation of skills, review of leadership and decision making, presentations on situational awareness and positive control, and two on-the-water training sessions with a focus on navigational communications, emergency procedures, and electronic navigation. All coxswains at Station 37 completed the refresher training and the station returned to operations. 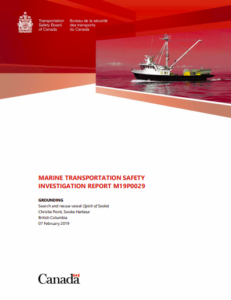