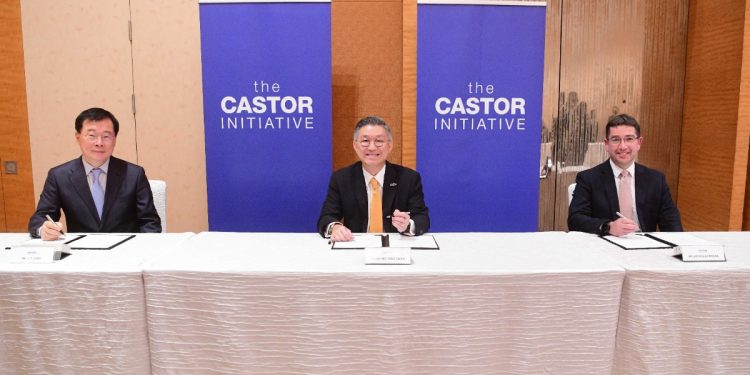 Lloyd’s Register, Samsung Heavy Industries (SHI) and MISC via its subsidiary, AET, have signed a Memorandum of Understanding (MOU) for the development and construction of two very large crude carriers (VLCC) which can be operated on zero-emission fuel.

The three companies, all founding members of The Castor Initiative, are taking the lead to encourage the use of green ammonia as propulsion fuel, with the first of these dual-fuel tankers entering into service in late 2025 and the second in early 2026.

What is The Castor Initiative?

Since the project began back in January 2020, partners goal to meet the International Maritime Organization’s (IMO) 2050 ambitions on halving greenhouse gas (GHG) emissions from 2008 levels by using ammonia as a fuel.

What is more, the Castor Initiative was motivated by the partners’ shared belief that the maritime industry needs leadership and greater collaboration if shipping is to meet the IMO’s GHG ambitions.

Following the inking of this MOU, The Castor Initiative members will focus on identifying green shipping corridors to facilitate the bunkering of these zero-emission Very Large Crude Carriers (VLCCs).

In addition, the Castor Initiative members will also be looking into the establishment of approved training syllabus for seafarers in at least two maritime training institutions. It is crucial to ensure that the latest training and education is provided to the crew to enable the smooth operations of the zero-emission VLCCs.

Today’s announcement fires the starting gun for deep-sea shipping to transition to a fuel which contains no carbon molecules, and Lloyd’s Register is delighted to be supporting this transition

The signing of today’s MOU is the beginning of many more forward moves that will come from The Castor Initiative, to accomplish our GHG ambitions jointly, ahead of 2050.

…said MISC President and Group CEO, Datuk Yee Yang Chien, adding also that the efforts of the collaboration have brought all partners to this historic moment, where everyone will soon see the delivery of the world’s first two zero-emission VLCCs, which will be owned and operated by AET.