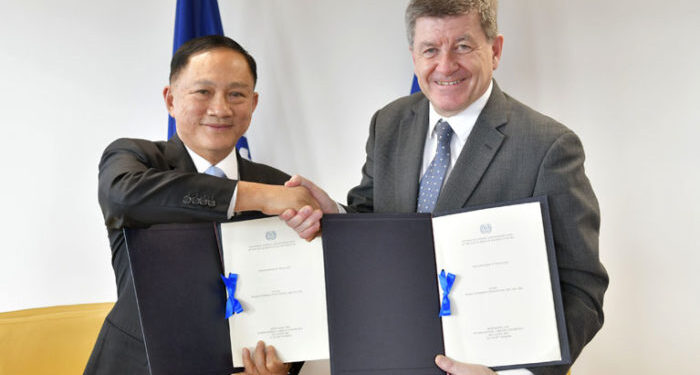 Thailand is the first country in Asia to accept the Work in Fishing Convention, 2007 (No. 188), that protects the living and working conditions of fishers onboard vessels. The Convention has specific requirements related to work on board fishing vessels, including occupational safety and health, medical care at sea and ashore rest periods, written work agreements, and social security protection. It also aims to ensure that fishing vessels provide decent living conditions for fishers on board.

Specifically, Angola, Argentina, Bosnia and Herzegovina, Congo, Estonia, France, Lithuania, Morocco, Namibia, Norway, Senegal, South Africa and the United Kingdom, had already ratified the Work in Fishing Convention, making Thailand the 14th country to ratify it. Dating back to 2007, the Convention came into force for the first 10 ratifying States on 17 November 2017.

It will come into force in Thailand 30 January 2020, a year after ratification.

According to ILO’s press release, Thailand’s commercial fishing and seafood industry contributes to approximately US $6 billion to the country’s exports, while Thailand is among the top global exporters of seafood products.

Additionally, both the fishing and seafood processing sectors in Thailand employed up to 600.000 employees in 2017, out of which the 302.000 were issued as migrants workers.

Thai Labour Minister, Police General Adul Sangsingkeo, who deposited the instrument of ratification at the headquarters of the International Labour Organization in the presence of ILO Director-General Guy Ryder noted that

The Royal Thai Government’s ratification of the Convention reflects its strong political will to ensure that the working conditions in its domestic fishing industry meet ILO standards. It underlines Thailand’s full commitment to raising the standards of labor protection for both Thai and migrant workers and eliminating forced labour, in line with the Sustainable Development Goals.

Whereas ILO Director-General Guy Ryder addressed that he appreciates Thailand’s commitment to building decent working conditions in the fishing sector.

In addition to Work in Fishing Convention, Thailand’s Ministry of Labour proposed 18-year-olds to be employed by the fishing field as trainees, according to Bangkok Post.

Working in Fishing Convetion’s C188 supports that 16-year-olds and over can work on fishing boats under the circumstances that they have completed the training needed.

Yet, Labour Minister Adul Sangsingkeo noted that there has not been an agreement, up to now as the proposal is regarded as highly sensitive and controversial.