Above image is used for illustration purposes only / Credit: UNHCR, Alfredo D’Amato

Following announcement that a total of 200 migrants have lost their lives worldwide in the first three weeks of 2019, the number now has climbed to 226 for the period 1st-31st January.

The European Community Shipowners’ Associations (ECSA) criticised the move last week, calling on EU member states to “set aside the disputes and decide on how to cope with the refugees rescued in the Mediterranean”.

We are very disappointed with Germany’s decision to suspend its participation in Operation Sophia. Operation Sophia’s contribution to maritime security in the Central Mediterranean is very important. There has been an important reduction in the number of migrant crossings which can be attributed to the EUNAVFOR Operation Sophia, whilst it has conducted an increased proportion of rescue operations,

Similarly, the German Shipowners’ Association (VDR) expressed their regret for the decision of the government and called upon the EU to find a solution to the protracted dispute on how merchant vessels will cope with boat refugees.

A 117 vulnerable migrants are believed to have died on the Mediterranean in the first three weeks of January, and another 83 outside Med, according to a previous IOM update.

The news of the second tragedy came along with the rescue of three survivors, two Sudanese nationals and one from The Gambia, who were interviewed by IOM staff on the island of Lampedusa.

As they reported, the three men were on a dinghy carrying 120 migrants, the majority coming from western African countries. About 40 Sudanese nationals also were onboard, having left the Libyan Port of Garabuli on Thursday night.

After about 10 hours at sea, the dinghy started to take on water and many of its passengers drowned, the survivors informed. Among the people drowned were ten women, one known to be pregnant, and two children, including a 2 month-old toddler.

The three men managed to stay afloat for several  hours before being spotted by an Italian Navy patrol plane some 50 miles off the Libyan coast.

The International Organisation for Migration (IOM) says that 4,216 people made the crossing in the first 16 days of 2019 - more than double the number who arrived in the same period in 2018. 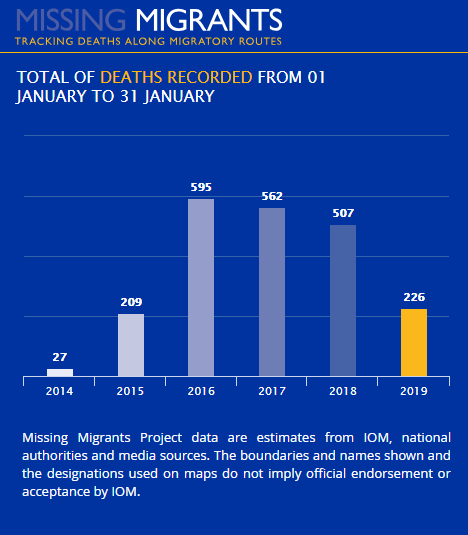