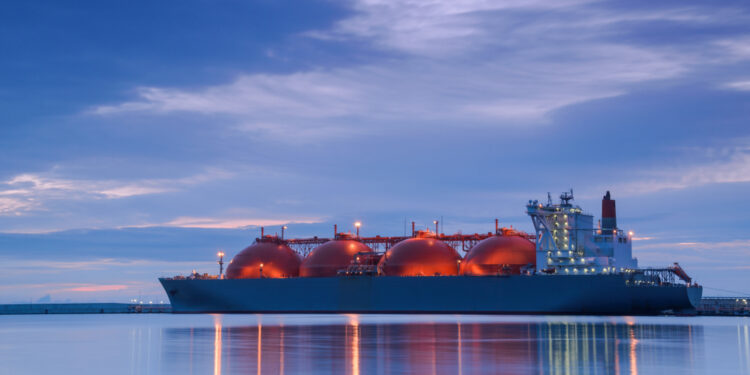 The Shell LNG Outlook, highlighting key trends in 2020, notes that the increase in volume reflects the resilience and flexibility of the global LNG market in 2020, a year which saw losses to global GDP of several trillion dollars as economies struggled to contain the COVID-19 outbreak. Demand in 2019 stood at 358 million tonnes.

1. Gas and LNG have a key role to play in a decarbonising world:

2. LNG shows its resilience and flexibility in 2020:

According to the report, global LNG prices hit a record low early in the year but ended the 12-month period at a six-year high, as demand in parts of Asia recovered and winter buying increased against tightened supply.

LNG provided flexible energy which the world needed during the COVID-19 pandemic, demonstrating its resilience and ability to power people’s lives in these unprecedented times. Around the world countries and companies, including Shell, are adopting net-zero emissions targets and seeking to create lower-carbon energy systems. As the cleanest-burning fossil fuel, natural gas and LNG have a central role to play in delivering the energy the world needs and helping power progress towards these targets,

Natural gas emits 45%-55% fewer greenhouse gas emissions and less than one-tenth of the air pollutants than coal when used to generate electricity, the report notes. 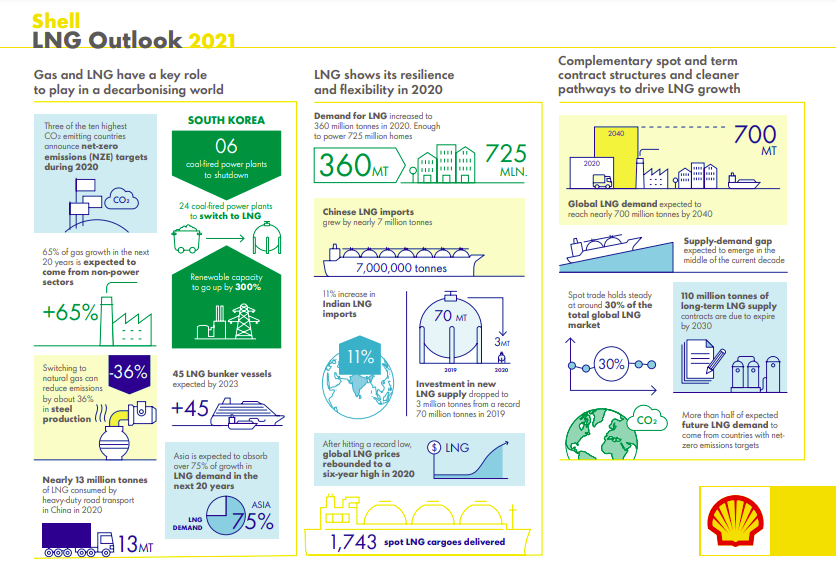 China and India led the recovery in demand for LNG following the outbreak of the pandemic. China increased its LNG imports by 7 million tonnes to 67 million tonnes, an 11% increase for the year.

China’s announcement of a target to become carbon neutral by 2060 is expected to continue driving up its LNG demand through the key role gas can play in decarbonising hard-to-abate sectors, namely buildings, heavy industry, shipping and heavy-duty road transport.

India increased imports by 11% in 2020 as it took advantage of lower-priced LNG to supplement its domestic gas production.

Demand in Europe, alongside flexible US supply, helped to balance the global LNG market in the first half of 2020. However, supply outages in other basins, structural constraints and extreme weather later in the year resulted in higher prices.

For instance, China’s heavy-duty transport sector consumed nearly 13 million tonnes of LNG in 2020, almost doubling from 2018, to serve the fast-growing fleet of well over 500,000 LNG-fuelled trucks and buses.

LNG-fueled shipping is also growing, with the number of vessels expected to more than double and global LNG bunkering vessels set to reach 45 by 2023.

As demand grows, a supply-demand gap is expected to open in the middle of the current decade with less new production coming on-stream than previously projected. Just 3 million tonnes in new LNG production capacity was announced in 2020, down from an expected 60 million tonnes.

According to estimates, more than half of future LNG demand will come from countries with net-zero emissions targets.

The LNG industry will need to innovate at every stage of the value chain to lower emissions and play a key role in powering hard-to-abate sectors.

Shell LNG Outlook coincides with the release of a study by SEA LNG coalition, which found that, for every 10% of bio-LNG dropped in and blended with LNG as a marine fuel, a vessel can achieve two extra years’ compliance with the Annual Efficiency Ratio (AER) curve used to secure preferable funding under the Poseidon Principles.