by The Editorial Team
in Accidents, Seafarers 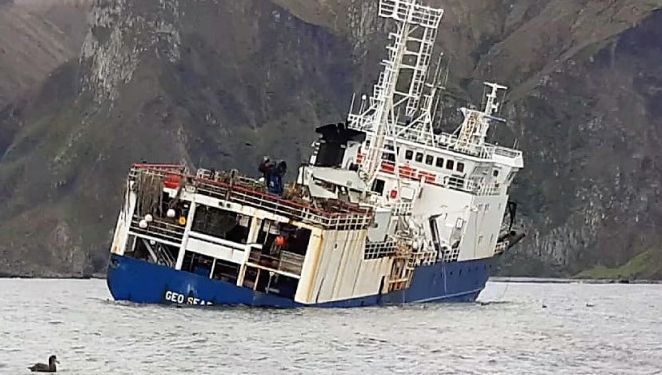 According to SAMSA, it was the end of a +5 000 kilometer journey for the 60 seafarers on board – 47 of them South African – who narrowly escape injury two weeks ago some 2600 kilometers deep in the Atlantic Ocean, after their fishing research vessel, “Geo Searcher” sank within a mile off the Gough Island.

When the vessel reportedly struck the underwater rocks and rapidly took water, the seafarers scrambled onto safety boats that helped them reach dry land.

In light of the situation, SAMSA through its Sea Watch and Rescue linked Maritime Rescue Coordinating Centre (MRCC) co-ordinated the entire rescue mission, while worked with various institutions and State departments including the Department of Environment, Forestry and Fisheries (DEFF), owners of the SA Agulhas II.

Following there, the country’s most advanced polar research vessel “SA Agulhas II”, dispatched to the Gough Island to fetch the stranded seamen and after initially battling with choppy ocean winds, it succefully reached and fetched all the seafarers for on boarding onto the vessel for the 2500 kilometer trip to Cape Town, which ended on 26 October.

The safe rescue and return of the 60 seafarers (two more others were dropped of at Tristan da Cuhna) marked the successful completion of South Africa’s most biggest sea rescue mission in over a decade.

Concluding, SA Agulhas II Master, Capt. Knowledge Bengu described the 62 rescued seafarers as “most grateful and with full appreciation of the hospitality they received.”