A Deck Cadet lost his life in an enclosed space onboard the RMI-registered bulk carrier LA DONNA I, in August 2018. The Republic of the Marshall Islands issued its investigation report on the accident, identifying lack of familiarity with procedures as contributing factor to the fatality.

The Republic of the Marshall Islands-registered bulk carrier LA DONNA I, managed by FML Ship Management Ltd., arrived in the Port of Paradip, India on 12 August 2018 to discharge a cargo of 61,557 metric tons (MT) of coal.

At approximately 17301 on 14 August 2018, during cargo discharge operations, the Deck Cadet was reported to have been incapacitated due to oxygen deficient conditions in the enclosed Australian ladder trunk of Cargo Hold No. 6.

In response to the incident, the Chief Officer (C/O) entered the space to assist the Deck Cadet and subsequently lost consciousness.

The Deck Cadet and C/O were rescued from Cargo Hold No. 6 by the ship’s crew.

The C/O regained consciousness and recovered, however, the Deck Cadet did not survive.

The RMI marine safety investigation concluded that the causal factors that contributed to the Deck Cadet’s loss of life include:

Additional causal factors which likely contributed to the Deck Cadet’s loss of life include:

In response to this very serious marine casualty, the Company has taken the following preventive actions:

Additionally, the Administrator has taken the following action:

The following recommendations by RMI are based on the above conclusions and in consideration of the actions taken: 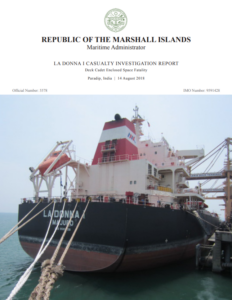