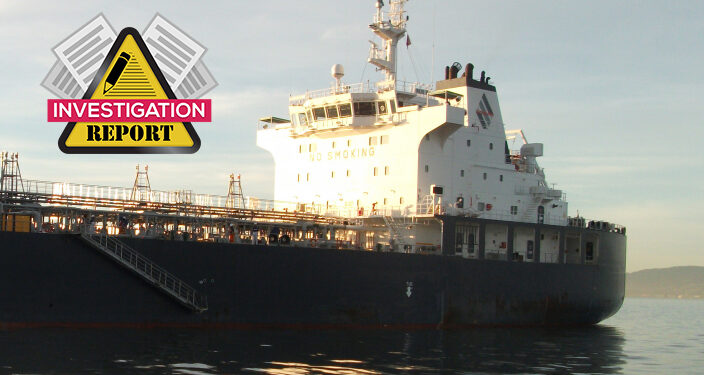 A crew member lost his life after entering an enclosed space onboard the oil/chemical tanker LINUS P in an attempt to rescue another crew who had lost consciousness, in November 2018. The Republic of the Marshall Islands issued an investigation report on an enclosed space fatality onboard, identifying failure in following enclosed space entry and other procedures.

The Republic of the Marshall Islands-registered oil/chemical tanker LINUS P was cleaning cargo tanks while underway off the west coast of the US on 24 November 2018.

At about 0030, an Able Seafarer Deck (ASD) 1, together with the Pumpman, was supplying fresh water to the No. 2 Port (P) Cargo Tank using a fire hose through the open tank dome.

During this work, he dropped his portable radio into the tank. The Pumpman reported that the ASD1 told him he was going to retrieve the radio from the tank after getting a flashlight.

The Pumpman reported that he tried to stop the ASD1 from entering the tank.

The ASD1 entered the inerted cargo tank to retrieve the radio without following onboard enclosed space entry procedures and the lack of oxygen quickly rendered him unconscious.

During the enclosed space rescue operation, the Second Officer (2/O) and ASD2, lost consciousness when they removed their self-contained breathing apparatus (SCBA) face masks while inside the cargo tank.

As a result, the ASD2 fell from the second platform of the tank access ladder to the tank top. All three individuals were subsequently removed from the tank.

The 2/O and the ASD1 recovered; however, the ASD2 did not survive the injuries sustained from his fall.

RMI marine safety investigation concluded that the causal factors that contributed to the death of the ASD2 and the injury to the ASD1 were:

The causal factors that likely contributed to the fatality and injury include:

In response to this very serious marine casualty, the Company has taken the following Preventive Actions: