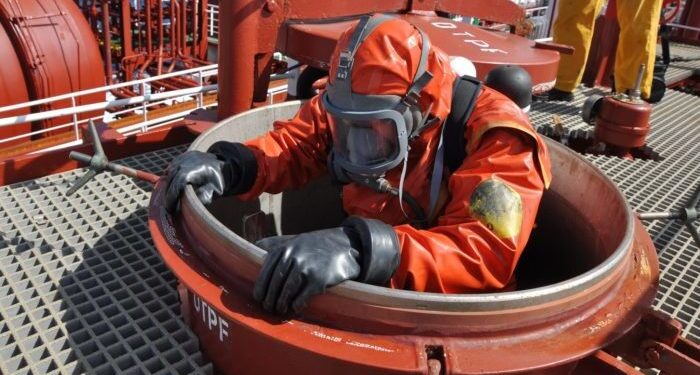 During the 2019 SAFETY4SEA Cyprus Conference, Mr. David Nichol, Senior Loss Prevention Executive, UK P&I Club, focused on accidents relating to entry into enclosed spaces onboard ships, which ‘continue to blight the shipping industry’. The dangers associated with enclosed spaces are well known – so why the unremitting level of casualties? Part of the problem, he noted, lies in common misconceptions as to what constitutes an enclosed space, the variable hazards they may present as well as the ever-present danger of human complacency.

It is commonly stated that more deaths occur in relation to enclosed space entry than any other shipboard activity. Human element failures are often cited in accident reports, including; fatigue, complacency and cutting corners as well as inadequate training and hazard awareness.

What is an enclosed space?

This necessarily broad definition is followed by numerous examples of enclosed spaces on board ships, but it is important to remember that this list is not exhaustive. All spaces must be individually assessed on a case by case basis taking into consideration all scenarios by which they could become dangerous. It is a requirement that a record of enclosed spaces is compiled and made readily available on board and it follows that this should extend to clearly and conspicuously labelling the point of entry.

The hazards associated with enclosed spaces are usually expressed in terms of the composition of the atmosphere or more particularly how it may vary from the normal atmosphere that we breathe as follows:

The above factors will be influenced by what is in the space (or adjacent space), how it is being used, or the condition of the space.

We may consider some examples of shipboard enclosed spaces, some being more obvious than others. Most would recognize a ballast tank as being an enclosed space requiring entry precautions. The main hazard is corrosion causing depletion of oxygen in the space; being the result of the steel reacting chemically with oxygen in the atmosphere to produce iron oxide – rust. This is not so much of a problem as it used to be due to significant improvements in the maintenance of coating systems, however, there is certainly no room for complacency.

Void spaces are particularly hazardous as they may seldom be opened for access, in combination with limited means of ventilation, if any. Chain lockers are perhaps not so obvious, as three crew members on board the offshore support vessel “VIKING ISLAY” tragically found to their cost.

The incident occurred while the vessel was on station in the North Sea and like many vessels of this type, the crew accommodation was in close proximity to the anchor chain locker. Due to vessel motions, noise from the anchor cables was disturbing the crew, who decided to go inside the chain locker to apply a lashing. Two crew members went to the peak space and after opening the access lid, one entered the chain locker and immediately collapsed. The other crew member alerted the bridge watch-keeper and after entering the space, also collapsed. Shortly afterwards the bridge watch-keeper entered the space wearing an emergency escape breathing device in an attempt to rescue his colleagues but he also collapsed after getting into difficulty. The three crew members unfortunately lost their lives. It was later determined that the oxygen in the chain locker had become depleted due to corrosion of the structure. Not only did the crew not follow correct procedures but it is apparent that they didn’t recognize that the chain locker was an enclosed space requiring special measures for entry.

Cargo holds are probably the most dangerous of spaces on board ships with numerous crew and stevedores losing their lives through unplanned entry. The holds are not in themselves dangerous. The danger is created by certain cargoes that are capable of depleting oxygen in the space such as grain, timber and mineral concentrates and/or which may emit toxic or flammable gas. Coal ticks all of these boxes and is possibly the most dangerous cargo commonly carried on bulk carriers. Some cargo hold ladders are contained within a vertical trunk, creating in effect an enclosed space within an enclosed space, so the atmosphere in the open hold may be safe and yet unsafe within the confined trunk space.

CO2 rooms and emergency fire pump wells are spaces that we would normally associate with ship safety but may be rendered dangerous in certain circumstances. A leak affecting the CO2 system will displace breathable air and there have been instances of crew or service technicians losing their lives by this cause. Emergency fire pumps are frequently located within a recessed well within the steering gear room. In one case I am aware of, the chief engineer and an inspector went into the well to check the operation of the pump and quickly started to feel the effects of oxygen deprivation. Both were very fortunate in being able to evacuate the well without suffering any long term effects. It was discovered that a leak of Freon gas from the provision room refrigeration plant in the steering flat had migrated into the fire pump well, creating a hazardous atmosphere within.

Engine rooms are full of enclosed spaces, containing numerous tanks, boilers and pressure vessels. In one tragic incident, a second engineer became trapped within a main engine scavenge space while carrying out an inspection prior to the vessel’s departure from port. He was unaccompanied and unattended by other crew members and while inside the space, the access door closed, engaging a cleat on the outside and trapping him within. The crew conducted a search of the vessel but failed to locate the engineer who inevitably lost his life after the main engine was started.

Enclosed spaces may not only be dangerous due to the composition of the atmosphere. Some spaces present other hazards for example, entering a large ballast tank will not only require enclosed space precautions but may involve the crew working aloft for which additional appropriate safety precautions will be need to be implemented. A ballast tank may be coated with mud, making it hazardous to move around. In one particular incident, the chief officer was carrying out a routine inspection of a deep tank and after stepping onto a horizontal stringer, presumably slipped and fell 8 metres to his death.

It is reported that nearly 60% of enclosed space casualties are persons attempting an ill prepared rescue. Typically, someone gets into difficulty within a space and other crew members attending instinctively attempt a rescue instead of raising the alarm and conducting a rescue in accordance with planned procedures and drill experience.

Concluding, enclosed spaces are dangerous until proven otherwise. All shipboard enclosed spaces should be positively identified; Safety Management System procedures must be strictly followed; rigorous training and drills conducted by the crew and finally, a zero tolerance culture to unprepared entry enforced.

Above text is an edited version of Mr. David Nichol’s presentation during the 2019 SAFETY4SEA Cyprus Conference.

David Nichol is a master mariner with 39 years of experience in the shipping industry. After sea service on tankers, bulk carriers and OBO’s, he worked as a ship surveyor and marine consultant for 18 years performing a wide range of casualty investigations, ship inspections and cargo surveys, with the majority of assignments being P&I related. From 2010, he was employed as a P&I Club senior claims executive before joining the loss prevention department of the UK P&I Club 3 years ago. David is based is the UK Club’s Piraeus office assisting members with loss prevention advice, training and education initiatives, as well as carrying out regular shipboard P&I risk assessments