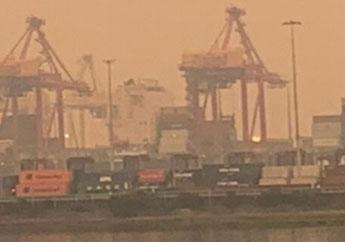 Port Botany shuts down due to fires and smokes

Fires have been affecting Sydney recently, filling the city with smoke; as the Port Botany is now expected to close again on December 10 for a second time within a week, as temperatures are expected to reach up to 40°C.

On Thursday, December 5, 50 uncontrolled fires merged north of Sydney into a ‘mega fire’ on a 60 km front; the state department of health warned conditions were so hazardous that people had stay inside, leading to schools and university campuses to shut down.

According to the Guardian, almost 100 members of the Maritime Union of Australia stopped work at Port Botany due to the thick smoke.

On December 5, the Freight & Trade Alliance (FTA) and the Australian Peak Shippers Association (APSA) have been advised that

due to the continued hazardous smoke conditions, Patrick Port Botany has closed the terminal with 1700 to 2300 time zones cancelled.

In a recent statement, the Maritime Union of Australia notes that the blanket of smoke and ash which has been falling in many areas, makes it difficult not only to work, but also to breathe, without getting any better.

The union stresses that Sydney has had some of the worst air quality on earth in recent days, advising that people with respiratory and cardiovascular problems are at serious risk, as the "smoke contains microscopic particles which could enter the blood stream and have a range of harmful effects in our bodies.”

MUA members on a ship in Sydney Harbour shared this view with us today of the smoke in the basin.

The union has called for the stevedoring companies to accept the stoppage as a safety issue and had been negotiating for the face masks and other precautions. However, management had initially resisted and wanted to put workers off pay.

Road and rail operations were not affected. By afternoon, DP World and Hutchison also agreed to stop quayside operations.

What is more, on the following dates after the stoppage on December 5, Randwick, adjacent to Port Botany terminal, registered maximum AQI readings of 523, 402, and 674- all readings over 200 to be rated as hazardous.

In September, NSW Ports and Patrick Terminals are collaborating on a A$190 million project to work on double on-dock rail infrastructure capacity at Port Botany’s Patrick Terminals - Sydney AutoStrad in Australia, boosting the supply chain.

The project aims to decrease the trucks on roads around the port. Moreover, the project will provide a capacity to handle 1 million TEUs on rail and enhance train turn-around times by 33%. During the project's commence, the rail operation at the terminal will continue so that the terminal's traffic won't be disrupted.

In July, a crucial safety incident took place at DP World’s Port Botany container terminal, in Australia. The wire ropes of the crane used to load and unload shipping containers slipped; Yet, there were no injuries.

According to the MUA, specifically, the first outcome of the investigation is that a contractor from Melbourne was deployed to change the wire ropes, but failed to be in line with the appropriate procedures. This resulted to clamps being installed upside down, a torque wrench not being applied, and endurance testing not being undertaken.