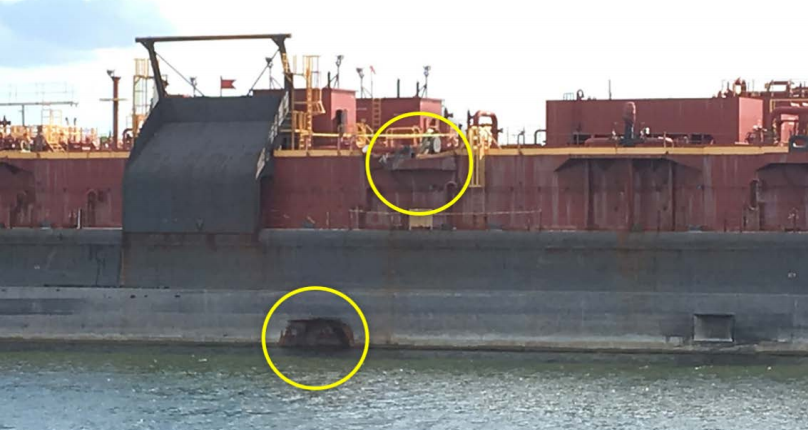 The US NTSB issued an investigation report on the collision of the bulk carrier 'Yochow' with the articulated tug and barge 'OSG Independence' in the Houston Ship Channel, in June 2018. The report highlights poor bridge resource management as the key cause of the accident and fatigue as a significant contributing factor.

At 0250 local time on 13 June 2018, the inbound bulk carrier 'Yochow' collided with the articulated tug and barge 'OSG Independence/OSG 243', which was moored at the TPC Group, Inc. facility on the Houston Ship Channel in Houston, Texas.

As a result of the collision, two of the barge’s tanks and Yochow’s bulbous bow were holed, and the facility suffered extensive structural damage.

There were no injuries among the crew of 18 on the Yochow or the 8 aboard the tug OSG Independence, nor was any pollution reported.

The Houston Ship Channel above Lynchburg Landing is a meandering and narrow waterway with facilities lining both banks for several miles, but electronic data showed that the bridge team was able to successfully navigate the channel at the prevailing conditions, without an assist tug.

Investigators found no deficiencies with the steering gear or other engineering or bridge equipment. Twice during the transit, including just prior to the accident, the pilot gave a rudder order that the helmsman correctly repeated, yet he turned the wheel in the opposite direction.

In both cases, the pilot—not the watch officer—noted the error and took action to direct the helmsman to correct the rudder.

Bridge procedures provided by Yochow’s operator were silent on the duties of the mate on watch in restricted waters, including watching the helm.

The second mate told investigators though that “one of my duties as the officer on duty is to monitor the helmsman.”

The pilot told investigators that it is not an uncommon scenario to have helm orders improperly executed and that pilots learn to watch for it. Giving the command midships will grab the helmsman’s attention quicker than just repeating the original command.

Bridge resource management (BRM) is an industry standard for using all available technical and human resources to safely execute a vessel’s passage plan.

It requires all involved to maintain situational awareness and share information freely to address contingencies.

The mate on watch, who was standing next to the helm, did not notice or correct the helmsman during the two steering errors.

According to their logs, the mate and helmsman each stood 8 hours of watch per day and met STCW rest requirements.

However, the helmsman stated that he performed work that was not reflected in the log, which the investigation found meant that he would not have met work/rest requirements.

Failure to adhere to work/rest guidelines can lead to fatigue and thereby can impair a crewmember’s alertness and ability to safely operate a vessel or perform safety-related duties. Further, at the time of the accident the helmsman had been at the wheel continuously for almost 3 hours, at night, without relief, and was likely fatigued.

Fatigue impacts every aspect of human performance, including decision-making, reaction time, and comprehension, all of which affect seafarers’ ability to safely navigate. Having fatigued crewmembers in critical positions when navigating a busy channel increases the probability of errors that lead to incidents. Companies should include fatigue management procedures in their safety management systems and ensure compliance with applicable work/rest requirements. 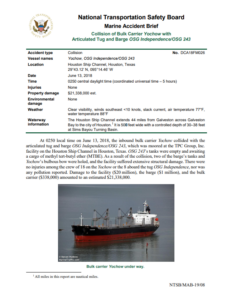