Perpetrator arrested after armed robbery on vessel off Manila

In its weekly report for 27 Apr-3 May 2021, ReCAAP ISC informed of one armed robbery against ships in Asia, involving a tug boat and a barge anchored at South Harbour Anchorage, Manila, Philippines, in the early morning hours of 20 April.

The master and crew conducted a search for the perpetrators and saw one of them asking to be rescued. The crew rescued him and reported the incident to its agent and subsequently to the Philippine Coast Guard (PCG) Port State Control.

Upon receipt of the report, the PCG immediately proceeded to the location and arrested the rescued perpetrator who was charged under a case of violation of Article 308 of the Revised Penal Code (A.30, RPC) also known as “Theft” at the Regional Trial Court of Manila, Philippines. All crew are safe, but 27 pieces of sawn timber were stolen. 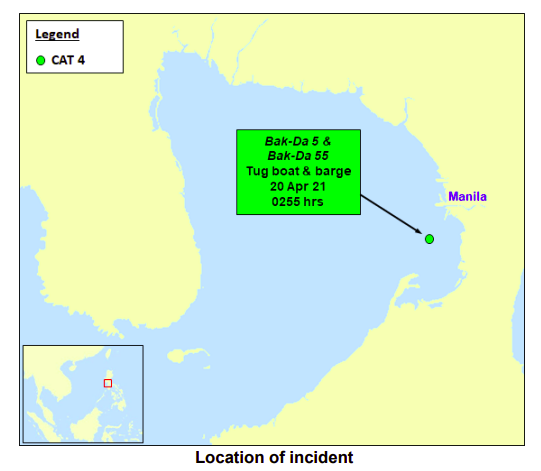 The incident was classified as a CAT 4 (“least significant”) in nature, which means the perpetrators were not armed, and the crew not harmed. The incident was reported to the PCG PSC and the Coast Guard at Sub Station of South Harbour.