According to Gibson Shipbrokers, OPEC+ announced the expansion of their product cuts for additional nine months until the end of the first quarter of 2020. Yet, the OPEC cuts are a negative development concerning Middle East's tanker market, mostly affecting VLCCs.

Specifically, according to the report, in Q4 of 2018, almost 68% of all spot VLCC trade originated out of the Middle East Gulf and Red Sea, compared to 14% out of West Africa and nearly 15% out of the US Gulf and Latin America.

Based on IEA's data, from November 2018 to March 2019, Middle East OPEC crude production, excluding Iran, decreased by over 1.6 million b/d, while only a marginal uptick in volume has been seen thereafter. As a result, such a decrease in production applied a considerable downwards pressure on sector earnings.

In the meantime, refining data also suggest that demand for crude is expected to increase. IEA indicates that global refining runs could rise by over 3 million b/d in the 3rd quarter of this year versus the previous quarter, with Europe and Asia alone needing an extra 0.8 million b/d each.

So, in light of the production cuts, additional demand is most likely to be met out of stocks; yet, refineries will need to rely on increases in crude production/imports.

However, the decrease on the Iranian crude output between November 2018 and June 2019 complicates the overall production/export states out of the Middle East. The report addresses that in order to maintain the overall Middle East crude exports at levels similar to those seen earlier in the year, output by other Middle East OPEC producers actually needs to increase to compensate for the loss of Iranian barrels.

Concerning the US, the increased pipeline capacity in the US Gulf enables a further development in exports.

Incremental volumes are likely to flow to Europe and long haul to Asia, more than offsetting ongoing restraint out of the Middle East. If that is the case, then OPEC+ production cuts could actually be good for business.

To explore more, you may click on the PDF herebelow 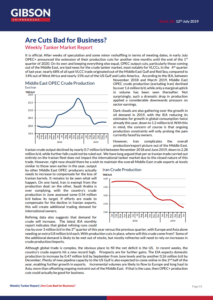