OCIMF released the information paper 'Guidelines to Harden Vessels', in which it recommends a layered defence methodology for hardening vessels to help prevent unauthorised boarding. This includes six defence layers, while training and ship design play a major part in securing a vessel.

Based on lessons learned from best management practices and risk mitigation measures, the paper recommends six layers that will improve a vessel's security. Despite the fact that the report focuses on ships that are underway, it also examines measures for ships at anchor and alongside. The six defence layers are the following:

A proper risk assessment should consider the following:

Furthermore, the risk assessment should be updates frequently to include new protection measures, while a Vessel Hardening Plan should be established as well. Vessel Hardening is the physical measures taken to improve a vessel's security.

There are two kinds of threats: physicals and virtuals. Physical threats come from the air, land or sea and can be identified more easily than virtuals. Virtual threats can be cyber attacks which damage the ship's operating systems. In order to prevent both threats from happening, consider the following:

One of the most important things is the control of access to the vessel. In order to have a better control of access, the ISPS Code should be followed, and it must be based on the ship's structure. Security measures should not obstruct the crew from abandoning the ship or carry out other emergencies.

If for any reason, intruders breach the first layer of defence, the second layer should include the following in order to prevent intruders from reaching further into the ship:

If intruders breach the second layer as well, OCIMF recommends the following measures:

Once intruders get on board, restriction of the ship's functions is important: 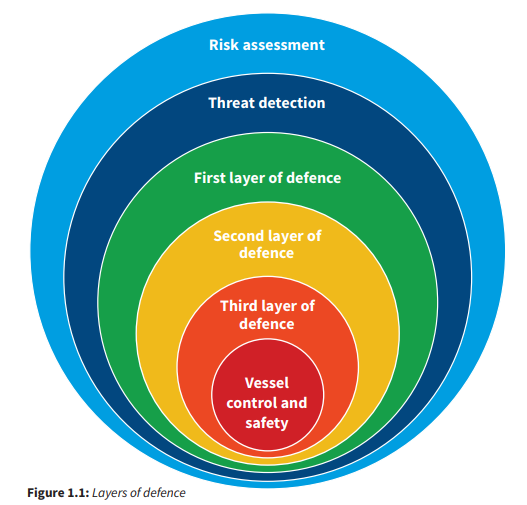