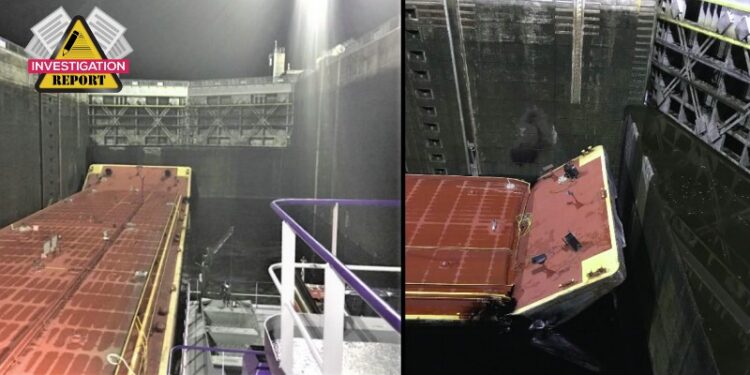 NTSB issued an investigation report on the contact of the towing vessel Savage Voyager with Jamie Whitten Lock & Dam, Mississippi, in September 2019. The investigation established that the crew did not effectively monitor and maintain the vessel’s position during its descent.

On September 8, 2019, at 0355 local time, the towing vessel Savage Voyager and its tow of two loaded tank barges were engaged in southbound locking operations at the Jamie Whitten Lock & Dam on the Tennessee-Tombigbee Waterway, 6 miles from Dennis, Mississippi.

After lock operations began, the bow of barge PBL 3422 contacted the lock’s upper gate sill and was hung up as the water level dropped, resulting in hull failure and a cargo tank breach.

NTSB determines that the probable cause of the contact of the Savage Voyager’s tow with the Jamie Whitten Lock & Dam was the tow moving out of position in the lock chamber while locking down, when the crew did not effectively monitor and maintain the vessel’s position during its descent, resulting in the aft barge becoming hung on the upper gate miter sill.

The deckhand and tankerman followed the Corp of Engineers’ standard operating procedures and used two lines (one forward and one aft) to secure the two barges inside the lock chamber. The deckhand stated that after the crew “knocked out” the Savage Voyager and secured the tow alongside the barges, the PBL 3422’s stern line was secure and the tow had not crossed the yellow warning line that marked the upper gate’s submerged miter sill. With the Savage Voyager at the barge’s side, the tow’s length was reduced to 595 feet, and in the 600-foot-long lock chamber, the crew had only 5 feet of clearance in which the tow might safely move, leaving a very small margin of error and requiring the deckhand and tankerman to closely watch their respective lines.

Locking operations began with about 23 feet of water above the upper gate miter sill (and 23 feet on the staff gauge), and the lock operator stated that he verified that the tow’s placement was within the yellow warning line at the time the locking process began. However, at some point during locking, the PBL 3422 crossed the warning line, placing the tow in danger of contacting the miter sill.

The Corp of Engineers’ postaccident testing showed it took a combined 3 minutes and 58 seconds for the water level to drop to the sill. The PBL 3422’s tow knees were 1.6 feet below the surface of the water; therefore, a 21.4-foot drop would likely have resulted in contact with the sill.

With the water lowering at a calculated average rate of about 1 foot every 10.3 seconds, less than 30 seconds after locking commenced and the emptying valves began to open, the lock operator would have lost visual of the tow, since the main deck would have dipped below his video camera.

After about 3.7 minutes, the barge’s tow knees would have contacted the sill. The deckhand stated that he noticed the barge was stuck “maybe a couple seconds after . . . water had begun to come out of the chamber.”

However, it would have taken over 3 minutes after lock operations began for the barge to contact the miter sill, indicating that it is unlikely that the deckhand was attentively minding the stern line. Additionally, the tankerman was not aware that the vessel was out of position until the deckhand radioed him.

Had the deck crew been vigilantly monitoring the vessel’s position, they would have noticed the barge was out of position before it became stuck on the sill and could have alerted the pilot.

Once the PBL 3422’s rake became hung on the concrete miter sill, the deckhand notified the pilot, who sounded the towboat’s general alarm about 0355 and radioed the lock operator to request he halt the locking process. The pilot also attempted to mitigate further damage to the barge and pull it off the sill by throttling both engines full ahead.

However, since it took over 2 minutes for the emptying valves to fully close, the water continued to rapidly descend in the lock chamber, and the barge became hung on the sill, bending the rake and breaching the forward cargo tank before dropping into the water.

Although locking operations can seem routine, the margins for safety are frequently low. Maintaining vessel position and communication with the lock operator are critical practices to ensure safe lockage. Crews should avoid complacency and vigilantly monitor lines at all times to prevent “running” in a lock.