The US National Transportation Safety Board published its report on the collision of the towing vessel St. Rita and tow with moored barges, and subsequent sinking.

On the morning of March 7, the date of the accident, the St. Rita’s captain started his work shift at 0300, and the two on-duty deckhands started their shift at 0530.

During the morning hours, the towboat shifted barges in the La Place fleeting area, moved an empty hopper barge from the left descending bank of the river to the right descending bank, and moved barges from a cargo ship to shore. 2 After refueling about 0900, the St. Rita began making room in the fleeting area to assemble barges for another towing vessel. The captain finished “clearing up room” about 1300, and afterwards, the St. Rita received orders from the captain of the lead towboat of the fleeting area to move the empty hopper barge LTD 14161, which was about 200 feet long, from a group of barges moored on the right descending bank, called Block 2, to the left descending bank of the river, where they were building a tow.

According to the St. Rita’s captain, he had his deckhands make fast a single headline from the towboat onto the middle cavel (cleat) of the port side of the LTD 14161, and he positioned the towboat so that the barge was on its hip. He then worked the barge back and forth to obtain enough slack in the wires so that his deckhands could untie and release the wires from the other barges in the block. The captain said that he had difficulty moving the LTD 14161 because the current kept pushing the barge back against the other barges of Block 2. The captain said that he could not face up to the LTD 14161, thereby using two facing wires and the St. Rita’s push knees, because of the barge’s position in the block and because it would be a “downstreaming” maneuver, which was forbidden by the company, and he could not take the barge out of the block and then face up to it because this also would have been considered downstreaming.

After about 15 minutes, the two onduty deckhands were able to release all the wires, except for one that they had to cut, and they went to the galley. With the barge now completely free from the block, the St. Rita began its move with the barge toward the left descending bank and into the faster current in the center of the river. About 1,200 feet upstream of Block 2 was another block of nine barges on the west side of the river, called Block 1. The captain said that the space between Blocks 1 and 2 offered the greatest distance between the several blocks of the fleet on the west side. Due to the strong current, the captain could not head directly across the river but had to point/head the tow upstream to directly cross the river without being set down.

The St. Rita’s captain noticed another fleet towing vessel, the Roger D, nearby (just downriver and closer to the right descending bank). He told investigators that he believed the other vessel was heading upriver. He also stated that the other vessel’s Automatic Identification System (AIS) information was visible on his Rosepoint electronic charting system. The St. Rita’s captain called the captain of the Roger D because it was not moving as he had expected and found out that the Roger D was instead “shooting across to the east [left descending] bank” ahead of him upriver
between blocks 1 and 2. Believing that the Roger D had slowed down and worried that it was “falling,” or moving downriver with the current, the captain turned the St. Rita to starboard, and eventually the current grabbed the barge, and he lost control of the tow. The LTD 14161 collided with the barges moored at the head of Block 2 and became pinned (starboard-side to) against their bows. The St. Rita starboard side was pushed against the LTD 14161 by the current. The St. Rita immediately began listing to port. The captain sounded the general alarm and announced over VHF that the St. Rita was “going over” about 1420.

Upon hearing the general alarm, the on-watch deckhands assisted the two off-watch deckhands, who had been asleep in their cabins, and made their way toward the wheelhouse. Due to the increasing list and falling equipment that blocked their way, it took the four deckhands about two minutes to make it to the wheelhouse. All arrived with their lifejackets, except for one deckhand who had to drop his lifejacket in the passageway below in order to climb
up to the wheelhouse. With the St. Rita now listing about 40° and water pouring over the port-side bulwark, the captain ordered the crew to abandon the vessel to the LTD 14161 barge, which remained tied to the St. Rita. According to crewmember accounts, the total elapsed time from the sounding of the general alarm to their abandoning the towboat was 4–5 minutes.

The captain of the towing vessel Rod C heard the St. Rita’s distress call on his VHF radio and immediately directed his boat toward the listing vessel. He witnessed the crew of the St. Rita climbing aboard barge LTD 14161. The captain of the Rod C, who had about 3 years of experience as captain aboard towing vessels engaged in fleeting work, said that he believed the current was 5–6 knots in the vicinity of the sinking. As he approached the vessel and barge, he also noted that the watertight doors on the vessel appeared to be closed. After ascertaining that all the St. Rita’s
crew were safely aboard the barge, the Rod C’s captain approached the barge and took the St. Rita’s crewmembers aboard his vessel. A Rod C deckhand told investigators that he observed the St Rita settling by the stern and that the upper decks began to disappear. After the captain of the Rod C put a line from his vessel to the barge, the line from the St. Rita (which was mostly underwater) to the LTD 14161 parted. The vessel sank and settled at the bottom of the river about 1430. The captain of the Rod C brought the LTD 14161 to the left descending bank and secured it there; he then brought the rescued crew to shore around 1500. Salvage of the St. Rita began on October 15, 2019, and the vessel was lifted out of the water on October 29.

​The National Transportation Safety Board determined that the probable cause of the collision of towing vessel St. Rita and tow with moored barges and subsequent sinking was the captain’s inexperience in executing a fleeting operation on a single headline in heavy river current conditions in close proximity to the head of a block. 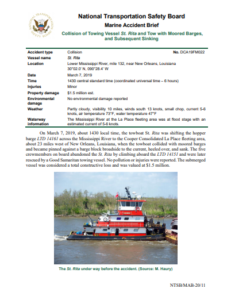