The additive chemistries found in traditional marine diesel cylinder lubricants may not suffice for the challenges of handling VLSFO blends, said US-based Lubrizol Corporation in a new white paper, after extensive research into new fuels.

More advanced solutions are needed to tackle deposit formation without relying on the high base detergents that were a mainstay of cylinder oils used with high-sulfur fuels,

In the new, low-sulfur era driven by the implementation of 2020 sulphur cap, the traditional lubricant indicator of base number (BN) – used to quantify acid neutralisation capability – will be only part of the equation.

New refinery processes and fuel blend stocks used to produce VLSFOs, as well as the expected incompatibility between VLSFO products, could lead to engine condition challenges that can only be tackled effectively with new lubricant additive chemistries.

The main function of marine engine cylinder lubricants is to provide lubricity that prevents damage to pistons and cylinder liners and choosing the right cylinder oil depends on several factors.

As shipping looks beyond IMO’s sulfur limits to its long-range carbon-cutting initiatives, notably its commitment to reduce total greenhouse gas emissions by at least 50% on 2008 levels by 2050, more new fuels will enter the market.

These may include hydrogen, ammonia and other gas and liquid fuels generated by using biomass or renewable energy.

Each new fuel will bring its own challenges to engine conditions, requiring new, sophisticated chemistries to counter them.

Advanced lubricants themselves could also contribute to reducing greenhouse gas emissions by, for example, reducing friction in engines to cut fuel consumption. 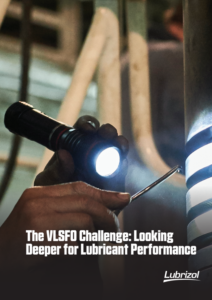