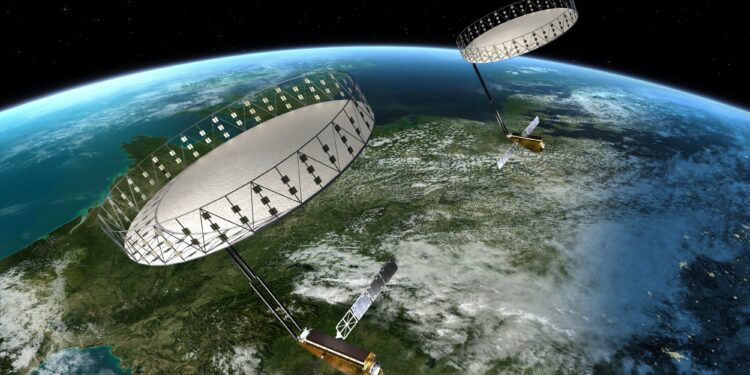 Scientists from the Alfred Wegener Institute are developing with experts from the German Aerospace Centre (DLR) a new satellite measurement method for the observation from space of the large ice masses of Greenland and the Antarctic. “Tandem-L” is the name of a new satellite radar system, which launched in the year 2022 could provide urgently needed data concerning the shrinkage of the ice sheets in both hemispheres.

“Extreme” is the word glaciologists now use to describe the extent of the annual summer melt on the surface of the Greenland ice sheet. This year, the scientists observed, especially in the north-east of Greenland, a widespread network of supraglacial lakes and streams on the ice sheet.

Their water masses give cause for concern, above all for one reason: The melt water almost always makes its way through the ice sheet. At the ice base this water acts like a lubricant. It increases the speed at which the glaciers move. The result: Larger ice masses slip into the ocean; the sea level rises to a greater extent.

In order to be able to investigate the effects of surface melt on the glaciers and ice sheets of the world more profoundly and, above all, in large areas, scientists from the Alfred Wegener Institute have been assisting experts from the German Aerospace Centre over the past four years to create a new, satellite-based radar concept.

This detects the changes in the ice sheets for the first time using a tomographic method and, for example, makes the penetration of the melt water visible.

“The new Tandem-L radar operates in the so-called L-band range. It emits radio waves with a wavelength of 24 centimetres, which in contrast to the previous satellite technology penetrate up to 100 metres deep in ice and snow. Thus, glaciologists would have the first opportunity to extensively screen the topmost ice layer of the glaciers and ice sheets from space and to map their inner structure. In addition, we can also measure the changes in the glacier surface with Tandem-L”, says Professor Angelika Humbert, Head of the Glaciology Section at the Alfred Wegener Institute, Helmholtz Centre for Polar and Marine Research (AWI).

The satellite mission Tandem-L consists of two satellites, each of which is equipped with an L-band radar and are to orbit around the Earth in formation at an altitude of 760 kilometres. The radars scan the Earth’s surface with a strip 175 to 350 kilometres wide. “Tandem-L will not only provide us with important ice information, but also receive urgently needed data on global forest biomass, soil moisture and ocean currents”, says the scientific coordinator of the satellite mission Professor Irena Hajnsek from the Microwaves and Radar Institute at DLR.