Maritime crash barriers for wind turbines to be developed 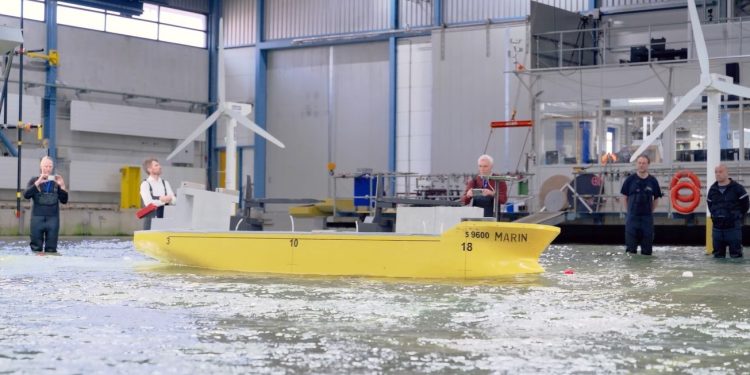 Dutch maritime research institute (MARIN) is working on solutions to avoid collisions between ships and the growing number of offshore wind turbines in the North Sea.

Some 2500 wind turbines are set to be installed on the North Sea in the period to 2030, taking the risk of a turbine being hit by a ship to around 1.5 to 2.5 times a year, research by the Maritime Research Institute Netherlands (MARIN) for the Dutch government shows.

According to the researchers, around 80 ships are reported drifting in the North Sea each year.

A collision with an installed wind turbine carries a real risk of the turbine toppling onto the vessel, seriously endangering crew, passengers, the ship itself and the environment. According to the team, the risk of a collision is growing rapidly as the number of wind turbines expands.

The accident involving the Julietta D shows the real dangers posed by vessels adrift. Even with current resources, it’s difficult to avoid these kinds of incidents

Yvonne Koldenhov refers to a Maltese-flagged bulk carrier, Julietta D, which lost control in a winter storm in the North Sea. The Julietta D was anchored off the coast of IJmuiden (the Netherlands) but got into difficulty when its anchor chain broke, causing it to collide with another ship.

After the collision, the Julietta D was taking on water and the crew members were evacuated by helicopter. The ship then drifted towards the coast of Scheveningen and collided with an offshore platform.

They noted that while the Julietta D incident did not result in a catastrophic accident, a collision with an installed wind turbine carries a real risk of the turbine toppling onto the vessel, seriously endangering crew, passengers, the ship itself, and the environment.

A group of 20 experts from MARIN and the wider maritime sector developed a trio of innovative concepts for maritime crash barriers between shipping routes and windfarms during a February 23 workshop.

Our mission statement includes both marine safety and sustainable sea use

We were keen to do this in tandem with experts from the offshore sector and that’s why we opted for an open innovation project. We gave it the working title “crash barriers at sea” because many wind farms are planned near traffic separation schemes: the freeways of the sea.’

The first concept involves a string of surface buoys secured by drag anchors. The second concept comprises a smart suspension net between fixed poles and the third is an anchored underwater hook line designed to catch the anchor of the drifting vessel. MARIN built scale models of all three solutions and ran tests in its Offshore Basin to see if the barriers were capable of deflecting a scale model comparable to the Julietta D in storm conditions.

The drag anchors of the buoy string dissipate the drift energy evenly so that the vessel stays afloat across the waves. The anchored underwater hook heads the vessel into the waves, so reducing roll. That means the vessel remains in place while being exposed to relatively low forces.

noted William Otto, adding also that “The smart suspension net initially showed too much droop, but with a bit of fine-tuning, we were able to get this functioning.”

The team is sharing the various concepts and all test results as an open innovation project to enable further development of the concepts.