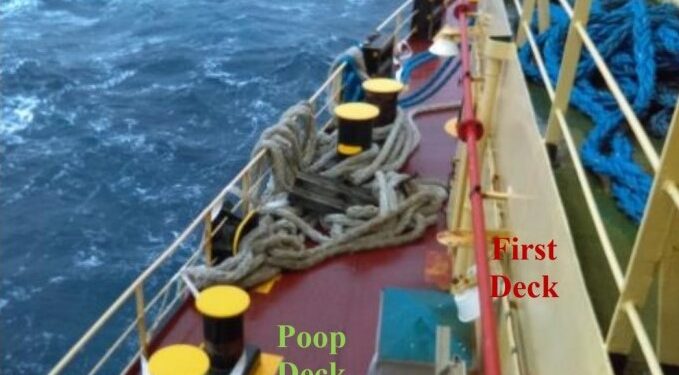 On 02 January 2020, a bulk carrier was on passage from Murmansk, Russia towards Constanta, Romania with 37,668 metric tonnes of fertilizer and crew of 19.

The vessel was on reduced speed due to main engine issues, facing South West wind at 44knots, with an estimated wave height recorded as 8m, visibility 5 nm, and with both air and sea temperatures at 5 °C.

It was noticed that mooring ropes stored on the poop deck had moved, with some mooring ropes now hanging over the vessel’s guard rails.

In an attempt to secure the mooring ropes two crew members (chief officer (C/O) and the deck trainee were working on the poop deck and other crewmembers were handling the ropes on the first deck.

At one point, two large waves washed over the poop deck washing the C/O and deck trainee overboard.

The Master was informed, the wheel immediately ordered hard over, lookouts posted to keep sight of the MOB marker and the Coast guard notified.

Because of the low speed and inclement weather conditions it took over 20 minutes to turn on a reciprocal course and proceed towards the man overboard (MOB) position.

A search took place, involving two Search & Rescue helicopters however, but it was unsuccessful.

Reportedly, during the securing operations, the C/O was heard telling the deck trainee that he needs to be secured with a rope. The C/O and trainee were both observed with ropes tied around their waists.

Once it was understood that the operation was now complete the C/O and deck trainee started making their way back from the poop deck. At this moment, a large wave is reported to have washed over the poop deck from the starboard to port side. Within seconds of the first a second, larger wave, then washed on board from the same direction.

Soon after the second wave struck, several crew members noticed orange, winter jackets floating in the water at which time it became clear that both the C/O and the deck trainee had been washed overboard.

According to Steamship Mutual, the investigation results appear to indicate: