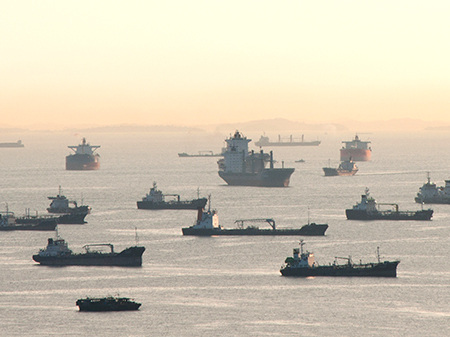 In its Monthly Safety Scenario for April, the Swedish Club describes a case of collision after grounding in a busy anchorage area. When changing the arrival time to the pilot station, the Master altered the plans, increasing speed, and took a shortcut through an anchorage.

It was evening with good visibility and vessel A was approaching port.

The Master had received orders to arrive at the pilot station at 20:40, which was one hour earlier than previously planned. To make the new ETA, the speed had to be increased from 10 knots to 14 knots.

Instead of following the passage plan, the Master decided to take a shortcut through an anchorage.

On the bridge was the Third Officer, who was the OOW, the Master who had the conn and the Chief Officer who was monitoring traffic both on the radar and visually. He was also talking on the VHF. An AB was manually steering. The Third Officer was filling out the logbook.

The two ARPA radars were in north up, relative motion and the radars were switched between 3 NM and 6 NM range. The CPA alarm was set to 0.3 NM.

The Second Officer who was the Navigation Officer, had already entered the waypoints for the original passage plan into both ARPA radars and the ECDIS, and a cross-track error alarm of 1 cable had been set up.

During the approach, he was not on the bridge and the passage plan was not updated for the shortcut as the Master did not consider it was necessary to update the passage plan.

During the approach to the pilot station, there were two smaller vessels ahead of vessel A that would be overtaken on their starboard side.

Shortly after, the vessels had been overtaken the Master ordered an alteration to port which meant that vessel A crossed in front of the bow of the two vessels.

The Master was also aware of two outbound vessels from the port, vessels B and C. These vessels were not acquired on the radar.

Vessel B called up vessel A and asked what their intentions were. The Master responded that he would like to have a port-to-port passing. Vessel B replied that it was turning hard to starboard to make the passing.

The Master altered course to starboard. At this time vessel B was about 1 NM away on the port bow.

The Master became aware of vessel C on the port bow. He could see the green, red and forward top lights on vessel C but did not take any action. Vessel A was maintaining a speed of 10 knots.

The Master decided to open up/ increase the CPA by altering 5 degrees to starboard for vessel C. A minute later the Master realised that vessel C was very close, and he ordered full ahead and hard to starboard.

The vessels just passed each other clear by 10 metres. When vessel C was abeam the Master became aware of an island just ahead and he ordered hard to port. When C passed clear the Master ordered midships and then 20 degrees to port.

Suddenly the vessel started to vibrate heavily and there was a loud noise. The vessel’s speed was reduced to 5 knots. The Master was initially confused about what had happened but then understood that the vessel had hit the bottom but was still making way.

The Master identified that vessel D was at anchor only 0.15 NM ahead of them, at which point the AB informed him that the rudder was not responding.

The Master ordered starboard 20 and then hard to starboard, but the AB repeated that the rudder was not responding. The vessel was now sailing at about 7 knots. The Chief Officer suggested dropping the anchor but the Master declined.

The Master reported the grounding to the VTS but did not consider it was necessary to report the collision.

Shortly after, the vessel managed to disengage from vessel D by engine manoeuvres and later dropped anchor.

What have we learned?

In light of the incident, the Swedish Club highlights that operators should take into consideration the following questions: