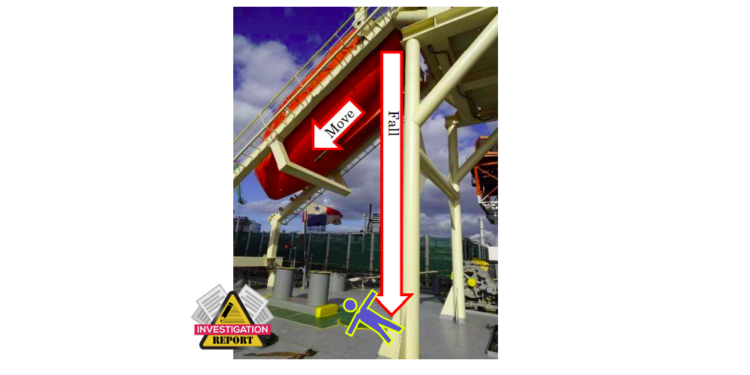 Japan’s Transportation Safety Board (JTSB) issued an investigation report on the fatality of a crew member onboard the cargo ship ORANGE PHOENIX, after falling from a lifeboat to the deck during an abandon ship drill in November 2019.

The crew members dropped a free-fall lifeboat that was installed on the stern deck in an empty state to the sea surface while hanging it with a hoisting wire. After that, they hoisted the lifeboat up to the original lifting and recovery position and hooked the hook of the release system installed at the stern of the lifeboat on the ring of the boat davit.

Around 11:20, when Navigation Officer A operated the release system and slightly inserted the safety pin, the hook was suddenly released and the lifeboat moved approx. 1.5 to 2.5 m downward on the guide rail. Thereby, Navigation Officer B lost his physical balance and fell head-first to the deck that was approx. 6 m below.

Upon receipt of a report by radio from Navigation Officer A, the master notified the agent of the fall and called for rescue. The agent notified Japan Coast Guard of the fall. Navigation Officer B was transferred to Japan Coast Guard’s helicopter that came to assist upon receipt of the notification, and was then taken by ambulance to a hospital in Osaka Prefecture. However, he was pronounced dead by a doctor, and the cause of death was confirmed as brain contusion.

The accident probably occurred in a manner that, when the Vessel was doing the lifting and recovery of the lifeboat, Navigation Officer B lost his balance and fell to the deck because he was taking photographs in a bent-over posture at the doorway at the stern of the lifeboat without wearing the safety belt, and the hook of the release system was released from the ring of the boat davit and the lifeboat moved downward along the guide rail.

It is considered probable that the hook of the release system was released from the ring of the boat davit because it is likely that the lock piece was not hooked in the appropriate place.

Company A issued a document concerning the accident to gain the attention of all the vessels it manages and also implemented the following measures:

It is probable that the following actions will be useful in preventing the reoccurrence of a similar accidents: