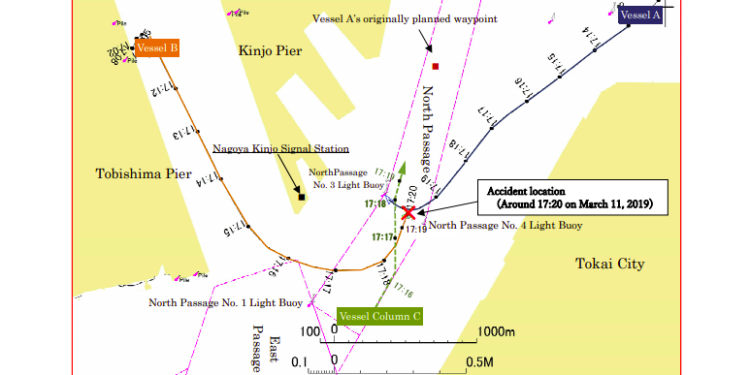 Map of the course of the accident events / CRedit: JTSB

JTSB issued an investigation report on the collision of the oil/chemical tanker EOS with the cargo ship AISHO No.8, in the Nagoya Port North Passage, Aichi Prefecture, in March 2019. The investigation stressed that each master respectively attempted to avoid the incident, but course signals made using international signal flags were not checked and VHF communication was not maintained.

Probably, as Vessel A was proceeding southwest toward the North Passage, Master A observed Vessel B off of the bow and assumed that the two ships were in a meeting relationship and would pass port-to-port. He also considered that Vessel B would cross the North Passage on an easterly course and head in the direction that Vessel A had come, and therefore he continued navigating at the same course and speed.

The JTSB report found probable that each master respectively attempted to avoid an accident:

It is probable that the fact that course signals made using international signal flags were not checked and communication by VHF or other means was not made between Vessel A and Vessel B contributed to the accident,

-Company A implemented the following measures following the accident:

-On its part, company B implemented the following measures:

The JTSB suggested the following actions maybe useful in preventing the reoccurrence of a similar accident: