India: Guidelines for women onboard

The Government of India focuses on the importance of women seafarers, highlighting that for the time being there are few Indian women on ships, and calling for additional women participation in the industry by launching guidelines.

In order to recommend measures to promote Indian women seafarers, India issued a Committee who provided its recommendations.

Concerning women seafarers whose pregnancy is detected whilst employed onboard, the seafarer should be repatriated as soon as possible and in no case exceeding 26 weeks of pregnancy.

Moreover, the shipowner should provide re-employment of seafarer, at least at the same rank on completion of maternity break, within 18 months of last sign-off.

The seafarers whose pregnancy is detected after - sign off - the the shipowner should provide provision of re-employment, at least at same rank on completion of maternity break, within 24 months of last sign-off.

When the seafarer completes its maternity break, she should communicate with the shipowners to confirm the date of re-joining. In addition, shipowners may consider offering an employment ashore to pregnant women seafarers until permissible medical conditions.

The guidelines highlight that the shipowner should provide to women seafarers the following:

The seafarers on board should be sensitized about the documented procedure of disposal of sanitary napkin. This can also be included in Briefing sessions or other suitable forums.

India also stresses the issue of sexual harassment onboard, noting that every effort should be made, by means of set procedures and guidelines, to resolve on-board complaints of sexual harassment on the ship itself in a fair, effective and expeditious manner, keeping the confidentiality of complainant and person against whom complaint is made.

Protecting women seafarers on a global scale, the ILO stated that mandatory pregnancy testing is now considered as a discriminatory practice. 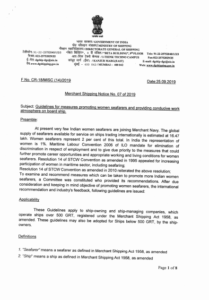