Decarbonization has been a major issue of discussion; Now, a new paper highlights that two potential low-emission fuels for long distance international shipping could be hydrogen (H2) and ammonia (NH3).

Specifically, the study notes that environmental pressures require the industry to keep a distance from oil and gas based fuels and focus on greener ones. Thus, the study discusses the feasibility of both hydrogen and ammonia for the application of long haul shipping.

Concerning hydrogen, the study suggests that volume requirements of either pressurised gas or liquid hydrogen are not sufficiently high to be considered infeasible. One potential hurdle for hydrogen could be the high price of fuel. However, due to the development of electrolysis technology and the decreasing cost of renewable power, then is possible that hydrogen could be available commercially at a competitive price by 2025.

On the other hand, ammonia comes with a number of advantages. An example is that the fuel needs less space for the same energy content and current market prices are more competitive. However, this study has highlighted one potential concern: ammonia’s relatively low gravitational energy density. The fact that this excess weight would likely negatively affect performance should be accounted for in future analysis.

Focusing on additional power sources, the study notes that batteries are unlikely to meet the size, weight or price requirements for long distance shipping. In addition, Methanol appeared to share similar characteristics with ammonia but, as the combustion still produces carbon emissions, it is considered a less desirable option.

Overall, both hydrogen and ammonia have some promising characteristics but there are some significant engineering challenges that need to be addressed before either can be definitively considered either viable or nonviable. 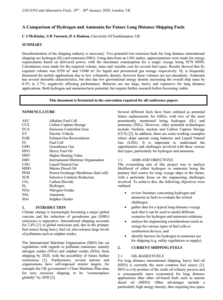