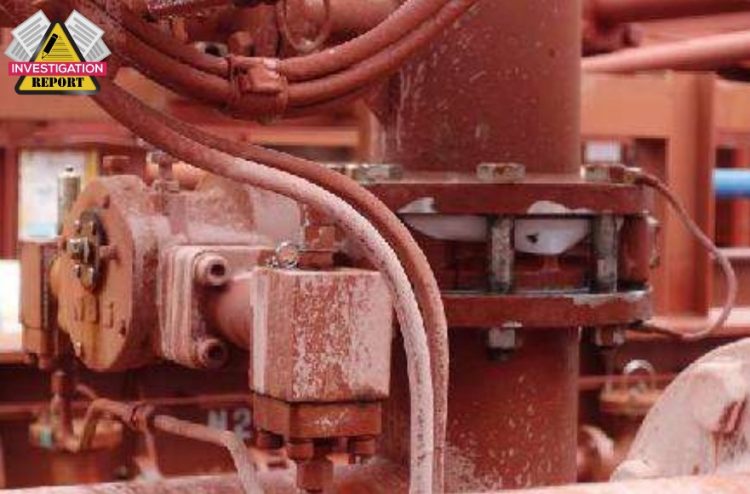 Belgium’s Federal Bureau for the Investigation of Maritime Accidents (FEBIMA) published its report regarding the mts “CENTRAL PARK”, onboard which a mist of sulphuric acid came into contact with the AB. The seafarer suffered second degree burns on his back, on the back of his neck, on his arms and his face.

On May 31st, 2021, CENTRAL PARK was on her way to the port of Antwerp to load a cargo of sulphuric acid, a corrosive product. Around 10:00 hours, a cargo operations meeting was held in the cargo control room. The meeting was organised by the Chief Officer and attended by all crew involved in cargo operations.

To load the cargo, 2 x 6” cargo hoses, supplied by the shore, were to be connected. One hose was connected to the 6” PS manifold of tank No. 4P and the other, by means of a reducer, to the PS manifold of the 12” common line, as indicated in the manifold arrangements in Figure 3. The terminal Loading Master was in radio contact with the cargo control room on board and with the Pump man on deck of CENTRAL PARK.

On June 3rd, at 06:30 hours, the loading of the cargo was finished. A cargo surveyor of Bureau Veritas boarded the vessel to take running samples of the received cargo, from each cargo only tank separately.

An AB was appointed to escort the cargo surveyor to the cargo only tanks. The AB was wearing a coverall, a helmet, safety shoes, a face shield, goggles and chemical resistant gloves. He was not wearing a hazmat suit, since he did not have to take the samples himself. His task was to escort the surveyor and to hand over an empty sampling bottle when asked for.

Around 09:00 hours, the terminal reported to the cargo control room that everything was in place to commence the blowing through of the 6” cargo line N°1. Because the vessel was stern trimmed upon completion of the loading of the cargo, this cargo line could not be drained by gravity.

The Pump Man and one AB were sent on deck. Their task was to open the manifold valves of tank N°1, valves 1P and 1S, when the air pressure in the 12” common line was built up to 5,5 bar and to monitor tank N°1 where the cargo remnants was led into.

Inside the cargo control room, the Officer of the Watch remotely operated the master and drop valves of cargo only tank N°1.

He informed the Chief Officer, who was present in the cargo control room, and the Pump Man on deck that the valves were put in open position. Subsequently, the terminal started blowing compressed air into the common line. When the pressure at the manifold was built up and reached 5 bars, the Pump Man informed the cargo control room and after confirmation of the Chief Officer, the manifold valves of tank N°1 were opened by the Pump Man and the pressurized air was led into the 6” cargo line.

The opening of the valves was followed by a hammering noise. The Pump Man immediately opened the manifold valve of tank N°4P to release the pressure from the cargo line and informed the terminal Loading Master to stop the line blowing operation.

The Pump Man then witnessed that the AB, that was escorting the BV cargo surveyor, was running to the emergency shower station on deck. The AB was exposed to sulphuric acid.

The spill of sulphuric acid on board CENTRAL PARK occurred because the closed master valve of cargo line N°1P caused a steam hammer effect when pressurized air was released into the partly filled cargo line.

The nuts of the bolts that tightened the gasket most probably slipped as a consequence of the steam hammer effect and this resulted in the Teflon gasket being pushed out during the line blowing operation.

The AB, that escorted the surveyor, was standing in the vicinity and downwind of the cargo line that had to be drained.

#1 During line blowing operations, the involved crew on deck was wearing a hazmat suit. The coverall worn by the AB that escorted the surveyor was not resistant against corrosives. The type of coverall contributed to the amount and severity of chemical burns.

#2 The attention during the preparation of the line blowing operation was distracted by paperwork. This led to:

#3 The result was the main valve of cargo line N°1P that remained in closed position when the pressurized air was released into the partly filled cargo line.