Researchers at Tallinn University of Technology have developed a prototype of the autonomous ship “NYMO”, which aims to be used for parcel delivery, mapping the seabed, conducting rescue operations and detecting pollution.

In fact, Hyrles OÜ and MEC Insenerilahendused OÜ, together with the Institute of Electrical Power Engineering and Mechatronics of Tallinn University of Technology, have been developing the autonomous robot ship since the beginning of 2019. 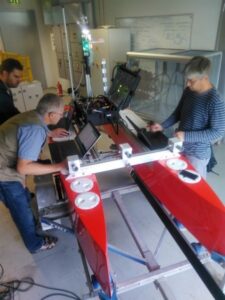 Moreover, the team was able to enlist the support of the Archimedes Foundation's in order to develop the vessel, reaching a total budget of the robot platform to be up to EUR 0.5 million.

According to Heigo Mõlder, Dr of Energy at Tallinn University of Technology, NYMO is a versatile and capable modular robotic platform that allows parcel shipping at sea, detects oil spills in the port, performs marine research and other appropriate operations at sea without direct human intervention.

On Saturday, August 31 the 2.5 m long autonomous robot ship was expected to sail to Keri Island as part of the celebrations 300th anniversary of the Keri Lighthouse.

In an interview in Estonia World, Heigo Mõlder said that

First, we tried to get the ship moving, so it could sail from point to point and this part works now. In the next step, the ship must be able to identify the surroundings, and in the third, it has to be able to plan its own route – these steps still need developing. The experiments have gone relatively well, and I don’t think there have been any serious setbacks. We had to replace some of the controllers, because they got wet. Unfortunately, salty sea water and electronics don’t go well together. We are moving according to a specific work plan and essentially developing software now.

In fact, autonomous shipping is making headlines in recent years for its promising potential advantages in the complex maritime environment, including elimination of human error, reduction of crewing costs, more efficient use of space in ship design and efficient use of fuel. A Finnish collaboration, established in 2016, seeks to pave the way for autonomous shipping as early as 2025, validating Nordic countries as the front-runners in the field of automation.

In October, IBM joined today a global alliance, led by marine research organization ProMare, which is developing an unmanned, fully-autonomous ship that will sail in a 12-day voyage through the Atlantic

in September 2020, powered by wind and solar energy. Specifically, the Mayflower Autonomous Ship (MAS) is expected to use IBM’s AI, advanced servers to navigate autonomously and avoid ocean hazards as it makes its way from Plymouth, England to Plymouth, Massachusetts.