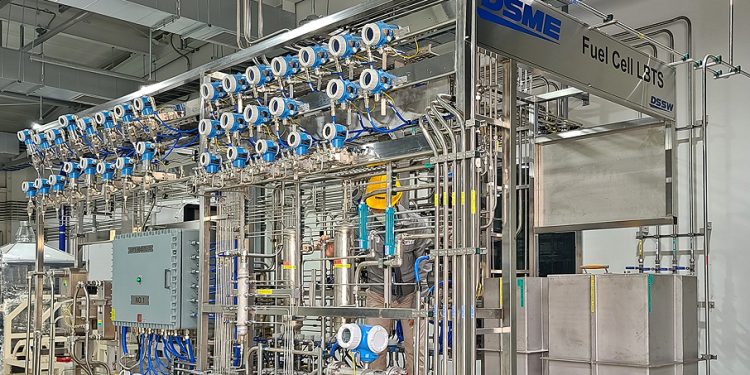 DSME announced on the 29th that it has built an ‘Electrification Land Based Test Site (LBTS)’ within its own research complex, the Siheung R&D Campus, Gyeonggi-do, for the development of advanced eco-friendly and smart ship technologies.

DSME has been working on related research since last year by building an ‘eco-friendly fuel LBTS’ using hydrogen, lithium-ion batteries and fuel cells as a key facility for the development of future eco-friendly ship technology.

The electric LBTS is designed to imitate the propulsion systems of real ships and ships and verify their performance. This facility, which is composed of a load simulator, a propulsion motor, a shaft generator motor, an energy storage system (ESS), and a controller, is expected to improve system efficiency through demonstration tests and greatly contribute to improving the maintenance efficiency of major equipment.

DSME has also set a goal to materialize the development of electrified core technologies, including electric propulsion systems, through the electrified LBTS, and raising the level to the next level.

At the same time, it is said that it will lay the foundation for the development of next-generation eco-friendly fuel and smart ship technology that encompasses large ships and ships.

The company also creates a next-generation electrification solution that integrates fuel cells by composing a hybrid propulsion system in connection with a shaft generator and battery and linking with the existing eco-friendly fuel LBTS.

In addition, it is planning to develop a next-generation fuel cell system that upgrades the practicality and operational efficiency of the submarine fuel cell currently in operation and undergo a demonstration procedure.

DSME will apply these onshore test facilities to various smart ship technologies that it has developed and applied. By using the characteristics of LBTS, which can generate, store, and analyze massive amounts of data on its own, it is planning to actively utilize it so that it can be operated not only in system automation but also in the metaverse environment.

The key keywords for the future ship technology market are decarbonization and digitalization, and electrification is an essential element