by Paul Hexter
in Fuels, Opinions 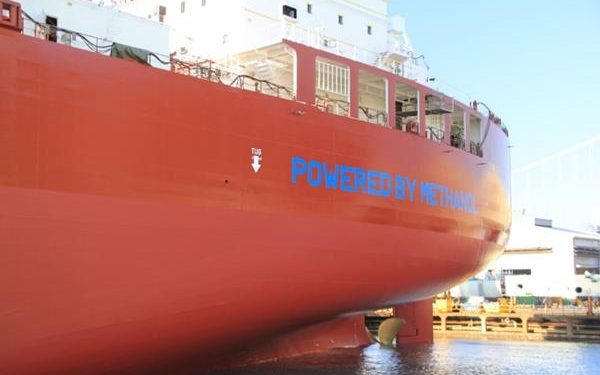 In an exclusive interview to SAFETY4SEA, Mr. Paul Hexter, President, Waterfront Shipping, outlines key advantages of choosing methanol as as fuel, citing their experience and future projects and discussing why methanol is considered a cost-competitive marine fuel and the best choice in the battle of alternative fuels.

Methanex, along with their subsidiary Waterfront Shipping, have been operating and bunkering methanol dual fuel vessels since 2016. They now have 17 methanol dual fuel vessels, with two more on the way. They are currently the world’s largest operator of methanol-fueled ocean tankers and by the end of Q1 2023, approximately 60 per cent of their fleet will be capable of running on methanol.
SAFETY4SEA: What are your top priorities in the agenda for the next 5 years?

Paul Hexter: Our key priorities are:

S4S: What are the key shipping challenges/ trends up to 2030 from your perspective and what is your organization doing towards?

P.H.: One of the key challenges faced today is decarbonization. The renewable methanol market, like most alternative fuels, is small but growing and hence commercial-scale availability and economics are not available today. This is the same for other green fuels like ammonia and hydrogen. Methanol is emerging as a leading alternative cleaner burning, future proof fuel. Methanol dual-fuel engines are available today and proven. This technology is flexible – it can burn diesel or methanol from conventional or renewable sources or a combination based on what future regulations require.

Methanex and its partners including MAN pioneered the methanol dual fuel engine and we continue to work in collaboration to advance the technology. Today, the methanol dual fuel engine has advanced to 3rd generation technology. Methanex has the capability of producing renewable natural gas-based bio methanol at our Geismar facility in the USA providing an option to procure renewable methanol today. We are also in ongoing discussions with a number of e-methanol and bio-methanol project developers for potential offtakes and/or investments.

In addition to renewable methanol, we are also currently assessing carbon capture at some of our production sites – sometimes referred to as blue methanol – which has the potential to provide a lower carbon methanol fuel solution for the marine sector. We remain committed to playing an active role in supporting the transition to a lower carbon economy and will continue to evaluate and prioritize innovation in methanol marine fuel.

S4S: They say that there is a gift/ opportunity in every challenge. Given the challenges that shipping is facing in way of decarbonization, what sort of opportunities do you identify?

P.H.: Industry interest in methanol as a marine fuel is rapidly growing. More recently, some of the world’s largest shipping companies (i.e. Maersk, CMA CGM and X-Press Feeders) demonstrated their commitment to methanol as a lower-carbon marine fuel by ordering new methanol dual-fuel vessels. Based on publicly announced orders, we estimate that by 2025, more than 85 dual-fuelled vessels will be on the water, including 19 of our own ships. We expect that number to continue to grow based on the strong commercial interest we are seeing in methanol.

Given the strong uptake in methanol, we will continue to see growing investments in advancing methanol and renewable methanol technologies. We are already seeing a growing number of leading engine manufacturers, including Wartsila, Rolls-Royce/MTU, ABC, Caterpillar, WinGD and others committing to producing methanol engines as more shipping companies recognize the advantages of methanol as a marine fuel.

S4S: How industry stakeholders may encourage innovative solutions for further acceptance of methanol as a marine fuel? What actions would you recommend?

P.H.: We are already seeing widescale industry acceptance and support for methanol as a marine fuel with a growing number of major shipping companies ordering methanol vessels, regulations being developed, and an increasing number of engine manufacturers providing methanol engines. As most new vessels are starting to come online over the next couple of years, we need to ensure regulations and bunkering infrastructure are in place in ports around the globe to support methanol bunkering; however, we believe it is relatively straightforward for methanol versus other alternative fuels, as methanol is already in over approximately 120 ports and is handled and bunkered very similar to diesel.

S4S: What would you like to see in the market to push forward the case of methanol as a fuel?

P.H.: Regulation and compliance will be the key drivers for shipowners to switch to cleaner fuels, as they are likely to be more expensive than traditional marine fuels. It is reasonable to expect that regulations or customer demand will be needed to drive higher uptake.

S4S: What arrangements are being made in terms of operational training and procedures for methanol bunkering?

P.H.: One of the unique and important qualities of methanol versus other alternative fuels is it is a liquid fuel under ambient conditions. This makes methanol easy to transport, store, and bunker using standard safety procedures that are similar to the well- 3 established procedures for diesel. Thus, the cost of methanol vessels and land-based infrastructure to store and supply methanol is lower than other alternative fuels that require pressurization or cryogenics.

Methanol with a higher volumetric energy content than alternative fuels like ammonia or hydrogen, is a better choice for a wide range of vessel types and longer voyages, as it requires less frequent bunkering. It is also available globally at over 120 ports and can be supplied through existing or easily repurposed landside storage or supply infrastructure. Methanol has a long history of safe handling and a recent safety study on alternative fuels by the maritime coalition, “Together in Safety,” assessed methanol as the lowest-risk fuel compared to LNG, hydrogen, and ammonia. Moreover, methanol is environmentally benign compared to other options as it dissolves in water and biodegrades rapidly. Methanol has been successfully used as a marine fuel for over seven years and during this period, the International Maritime Organization (IMO) developed guidelines to support its safe use and streamline further adoption.

Methanex has also been involved in initiatives to support methanol bunkering. Waterfreont Shipping (WFS) has been bunkering methanol from most of its production sites (Punta Arenas, Chile; Geismar, USA; Trinidad & Tobago; and New Plymouth, New Zealand) since 2016 where WFS also loads methanol as a cargo. In 2021, WFS demonstrated the first-ever barge-to-ship methanol bunkering operation at the Port of Rotterdam. The Takaroa Sun became the first methanol-powered ship to be fueled by a standard barge, proving that methanol is safe to ship, store, handle and bunker using procedures similar to those for conventional marine fuels. WFS is also demonstrating methanol bunkering in an increasing number of ports where there is existing methanol infrastructure.

S4S: Do higher oil/ fossil fuel prices necessarily make alternative fuels more attractive? What are your projections with regard to methanol price?

P.H.: Methanol is a cost-competitive marine fuel on an energy-equivalent basis with other low sulphur marine fuels. Adopting methanol dual-fuel engine technology enables shippers to operate cost-effectively and diversify fuel options regardless of market conditions. Vessel shipowners can choose to use the lowest-cost fuel that enables them to meet increasingly stringent air pollution regulations.

S4S: Do you have any new projects/ plans that you would like to share with industry stakeholders?

P.H.: To support the commercialization of methanol across the marine sector, Methanex has been involved in a number of other initiatives and pilot projects. Methanex is a partner in FASTWATER, a consortium of 14 organizations that are advancing the use of methanol in waterborne transportation. The consortium recently launched a pilot boat demonstration in Sweden and a harbour tug demonstration in the Port of Antwerp-Bruges. Methanex signed a Memorandum of Understanding with the National Energy Corporation of Trinidad & Tobago and is completing a feasibility study to assess the 4 potential for methanol as marine and vehicle fuels to reduce emissions in the transportation sector and provide economic benefits to the region. In China, we partnered with the China Waterborne Transportation Research Institute, the think-tank of the Ministry of Transport, to support an evaluation of the technical and operational requirements for the use of methanol as a marine fuel.

S4S: What is your key message to industry stakeholders with regards to a more sustainable future for shipping?

P.H.: Many shipowners are making decisions in the near term on alternative fuels and methanol is in a unique position compared with other alternative fuels – the technology is mature, IMO guidelines have been developed, and methanol is widely available in major ports around the world to support adoption today in the maritime sector. Methanol offers an immediate, in-sector CO2 reduction of up to 15% when compared to conventional marine fuels. It also offers a pathway to the use of renewable methanol which can be carbon neutral and deliver on the IMO’s long-term greenhouse gas goals. We remain committed to playing an active role in supporting the transition to a lower-carbon economy and will continue to evaluate and prioritize innovation in methanol marine fuel.

As the President of Waterfront Shipping, a subsidiary of Methanex Corporation, Paul Hexter manages the world's largest fleet of methanol tankers and is responsible for commercial and operational leadership as well as the renewal and expansion of the Waterfront Shipping fleet. Mr. Hexter has been with Waterfront Shipping for over 20 years and has served in the role of President since 2017. He is most proud of the leadership role that Waterfront Shipping and Methanex have played in developing methanol as a cleaner-burning alternative marine fuel and for the team's commitment to making improvements to the conditions and environment on board our fleet. Mr. Hexter is an active member of the BC Chamber of Shipping and a supporter of the Mission for Seafarers, a global network of centres offering a warm and hospitable ‘home away from home’ to visiting ship's crew. He also teaches a tanker chartering module as part of a Business of Shipping course to other shipping professionals in Vancouver, BC.