One year of IMO Sulphur cap: Lessons learned and the way forward 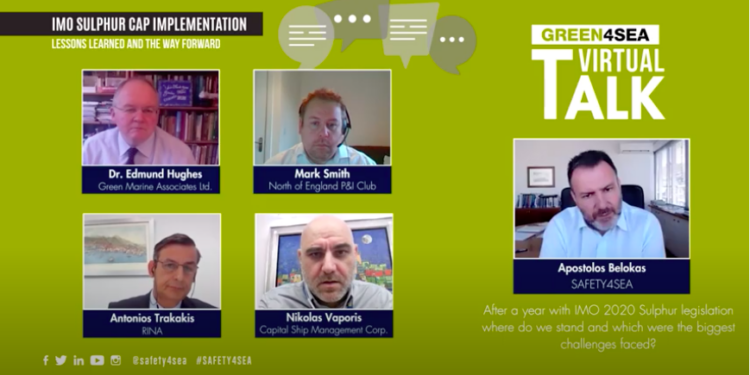 Indications are that the transition to 2020 sulphur cap has been ‘’extremely smooth, a testament to the preparations of all stakeholders prior to the new rules entering into force”, IMO said on the occasion of one year of implementation of the IMO Sulphur Cap requirement

From January 2020, the upper limit of the sulphur content of ships’ fuel oil was reduced to 0.5% (from 3.5%) – under the so-called “IMO 2020” regulation prescribed in the MARPOL Convention, bringing about a 70% cut in total sulphur oxide emissions from shipping.

While the methods for compliance with the requirement varied among compliant fuels and scrubbers, the majority of ships trading worldwide switched from using HFO to using VLSFO. Approximately 4.000 ships are currently fitted with scrubbers; on the occasion of the one year of IMO cap implementation, the Clean Shipping Alliance highlighted the important role that scrubbers play in the smooth transition to IMO 2020, reiterating also that EGCS can further support industry’s efforts for carbon neutrality as we are moving towards 2030.

As informed, through 2020, 55 cases of 0.50% compliant fuel being unavailable had been reported in IMO’s GISIS. Given that more than 60,000 ships plied the world’s oceans in trade last year, this was a remarkably low percentage of ships encountering difficulty in obtaining compliant fuel, said Roel Hoenders, Head of Air Pollution and Energy Efficiency at IMO.

‘’We have seen there was a smooth transition, only few instances of off-spec fuel were found. This is testimony to the proper planning and preparation done by shipping industry; an example of proper cooperation between different industry stakeholders.’’ commented Dr. Edmund Hughes, Director, Green Marine Associates Ltd. in a recent GREEN4SEA Talk.

‘’Although the transition was smooth, there are still a lot of challenges faced from a technical perspective. There is no problem with the fuel availability. For the time being, the biggest challenge is the stability of the fuel’’ noted Mr. Nikolas Vaporis, Chief Technical Officer, Capital Ship Management Corp.

Also, IMO has not received any reports of safety issues linked to VLSFO so far. Nonetheless, during 2020, the IMO MSC 102 correspondence group considered fuel oil safety issues in general and the need for further mandatory requirements to ensure fuel oil supplied meets the required standards and quality. The report will be discussed at the next MSC 103, in May 2021.

The implementation of IMO 2020 did not cause any disruptions in trade even during the COVID-19 pandemic, IMO noted. ‘’It was very clear that PSC inspections were much limited due to global restrictions. So, if inspections could be done properly, we may have found many vessels non compliant.’’ Mr. Antonios Trakakis, Technical Director, Marine at RINA pinpointed during the GREEN4SEA Talk.

‘’The aim of IMO 2020 enforcement should be to penalize ship-owners and charterers who are not making any effort to comply. We need ship-owners to have confidence in the system and openly report to the IMO GISIS module via their flag state to get a true measure of how many tests are returning above 0.50%. If PSC and Flag states act uniformly, we’d see less ship-owners with good intentions being penalized for fuels in the above range. It’s not just the fines but the reputational damage of a PSC detention is long lasting’’ stressed Mr Mark Smith, Loss Prevention Executive, North of England P&I Club.

We have to prepare ourselves from the next fuels, agreed participants of GREEN4SEA Talk.

‘’We now see LNG becoming more prevalent, also IMO decided on energy efficiency measures during last MEPC; all these efforts opt to reduce emissions in the short terminal. As far as we see the long term and regarding the IMO decarbonization agenda, there are many fossil fuels coming, however there is uncertainty of which is going to be the future fuel and there is still discussion’’ argued Dr. Hughes.

In his turn, Mr Vaporis highlighted once again that only uncertainty is around at the moment, meaning that IMO and all stakeholders will need to work harder on addressing the key challenges of new fuels.

‘’Uncertainty make shipowners decisions difficult. Today, shipowner has not sufficient data of the future fuels and therefore they can only see and wait’’ agreed Mr. Trakakis who added that according to studies, we see LNG to be the best way today to accommodate zero carbon fuels in the future fuel mix. This primarily involves hydrogen which removes problems regarding methane slip. ‘’LNG is not a bridge fuel but the right starting point for a clear decarbonization process, hydrogen can be progressive but will not come in one day. So an LNG fuel ship will solve many problems’’ Mr. Trakakis concluded.

Talking about the future, Mr Smith clarified that we have two different targets: 2030 and 2050.

2030 will going to focus on operational efficiency and a key question will be which are going to be the carbon incentives. In that regard, we need to be aware of the technology which is being invested at the moment

‘’2030 is about carbon reduction agenda of the existing fleet, for the 2050 goals will need alternative fuels and energy resources, we need to separate those two milestones, these are separate issues ‘’ Dr Hughes mentioned.

‘’There are many to be taken into consideration, we will not just think to scrubber or not and which fuel to use, decisions will require a holistic approach in order to focus on energy and operational efficiency on the whole for the next years. Decisions will be based on design with regards to all developments. ‘’ Mr. Smith pinpointed.

Dr Hughes also said that a key aspect to consider for the future is the economics. ‘’Ultimately, there is no a study to suggest that any of the future fuels is going to be cheaper than today fuels, so something needs to be done in order to incentivize operators towards these alternative, something needs to be done for market distortion, part of the equation will be to try to make these fuels competitive in the market. ‘’ he highlighted.

Concluding the discussion about future fuels, Mr Trakakis highlighted that shipowners are interested in the new energy supplies while many companies, across others sectors also, are planning to enter into decarbonization much earlier than 2050. Mr Smith agreed to this opinion and commented that carbon incentives can make a different towards that end.

‘’In the long term, we need to look at the whole production process, how each fuel is produced and how can reach vessels and definitely we should try to reach the decarbonization target before 2050. If we build a vessel in 2025, we need to look beyond and consider its energy efficiency today in order to strive to deacrbonization tomorrow. In this context, it is important to establish carbon incentives; these will impact everything even the infrastructure’’ Mr Smith said.

‘’This is something that shipping industry has to align and I m firmly convinced that industry is ready If the uncertainty was removed, then shipping would be ready for wonderful achievements in this direction.’’ ’ he stated.

According to Mr. Trakakis, the 3 biggest reasons of that uncertainty are:

#2 the fact that we are approaching the situation in a rather naive way; it is not only carbon contained in the fuels our main problem, there are so many other aspects also

Explore more by watching the video below: