by Michael Howlett
in Opinions, Security 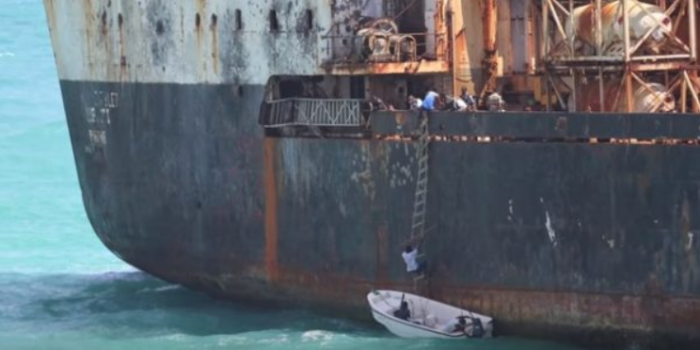 However, with information exchange and collaboration, incident reporting can act as a catalyst for change. The IMB Piracy Reporting Centre works on that end and ensures information on every incident received is promulgated timely and accurately for the benefit of all stakeholders, Mr. Howlett says.

SAFETY4SEA: According to latest IMB PRC Report, which are the maritime piracy hot spots today and the key alarming trends?

Michael Howlett: The kidnapping of innocent crew in the Gulf of Guinea remains the biggest area of concern. The current focus on the Region has resulted in the deployment of international warships, which is extremely positive. Other ongoing initiatives to enhance safety and security in the region must also be sustained on a Regional and International Level. There is also an alarming increase in incidents on vessels transiting the Singapore Straits as well as vessels anchored off Callao Anchorage, Peru. While both regions are viewed as low level opportunistic thefts, crews have in a few incidents been confronted, threatened and even injured. The IMB is concerned at the lack of a meaningful response in these waters and hopes this does not escalate in severity of the incidents.

S4S: Which are the key barriers in mitigating maritime piracy, and how could the industry to overcome them?

M.H.: The lack of resources to (1) communicate and exchange information, (2) respond in a timely and robust manner to result in (3) the apprehension of perpetrators and their prosecution under law are all key barriers which need to be addressed by coastal states whose territorial and EEZ waters are known to be affected by this crime. The industry can also assist by following anti-piracy guidance and advice. The industry is also encouraged to report all incidents – both actual and attempted – to regional centres and the IMB Piracy Reporting Centre so that accurate assessments can be made and adequate resources devoted by stakeholders to address the issue.

S4S: What successes from the past can we apply today to address maritime piracy?

M.H.: The consequences on crews, vessels and cargoes needs to be acknowledged and resources mandated to address this crime. Lessons from the actions of the international community on multiple levels off the coast of Somalia is a good example of international cooperation. The reduction of armed robbery incidents within Indonesian waters due to effective cooperation and information exchange between the Indonesian Marine Police and the IMB Piracy Reporting Centre another. There is also value in sharing intelligence reports on maritime criminal activity by regional authorities. The IMB Piracy Reporting Centre’s broadcasts of such reports to all ships transiting the Sulu and Celebes Seas played a key role in the cessation of ship attacks and crew kidnappings in these waters.

S4S: What can shipping do to protect seafarers from piracy threat successfully? What are your suggestions?

M.H.: Awareness of potential risks of this crime can greatly benefit Ship owners / operators and Masters as they plan voyages. Information of this crime, provided by the IMB Piracy Reporting Centre has assisted countless vessels and Masters plan their voyage, be risk aware and has also helped crew preparedness. The early detection of an approaching suspicious craft or crafts is key to preventing a vessel boarding. This is not just applicable to hotspots such as the Gulf of Guinea but to attacks globally, whether the vessel is underway, drifting, anchored or during cargo operations. This can give the crew valuable time to raise the alarm and retreat into a citadel or safe room, if needed.

S4S: If you could change one thing that would have an either profound or immediate impact on maritime security, what this one thing would it be and why?

M.H.: While locally committed, the crime of piracy and armed robbery has far-reaching consequences – such is the nature of global shipping. Even with advancements in technology information on this crime is communicated and sometimes acted upon in silos. While there may be some merit in this, it does not benefit the global shipping community, especially those who truly need to know – the crew onboard their vessels. Exchanging information in a timely manner and the information being acted upon in a transparent and meaningful way will allow greater awareness amongst all stakeholders. Every incident reported to the IMB Piracy Reporting Centre is exchanged in a timely and meaningful manner to best benefit all those who need to know. This also demonstrates the value of an independent and apolitical centre such as the IMB Piracy Reporting Centre.

S4S: What is your wish list for the industry and/or regulators and all parties involved towards maritime piracy and due diligence?

M.H.: There are three fundamental elements which need to work together and seamlessly – information exchange, prompt response to reports received and the legal finish. There is therefore a need for distress calls to be responded to promptly and effectively, to investigate and apprehend the criminal elements responsible and to ensure once captured, the criminals are fully punished under law. This is exactly the type of robust deterrent required to ensure the safety and security of innocent seafarers. Resources available to deal with this crime in territorial waters and the EEZ are limited. It is therefore imperative that all incidents reported are also notified to the Coastal Authorities. This acts as a catalyst for change as also illustrated by the regular reports from the IMB Piracy Reporting Centre.

S4S: What does shipping have to expect in the future piracy-wise?

M.H.: The act of piracy and armed robbery is fundamentally a crime born of deprivation and necessity. Due to this there will be Coastal states, waterways and regions within which this criminal activity will rise and fall. It is only the timely reporting of this crime to Centres such as the IMB Piracy Reporting Centre which will allow this information to be promulgated in near real time to raise awareness. Additionally, in most cases the perpetrators are not apprehended or punished appropriately under law. Due to this, areas of risk which have subsided due to regional and international cooperation continue to remain areas of concern as the capability often remains.

S4S: What is your key message to industry stakeholders with respect to maritime security?

M.H.: Piracy and armed robbery information is an essential part of effective voyage planning and maritime security. The IMB Piracy Reporting Centre provides this critical information, free of cost to all in the maritime domain, without exception to raise awareness of the sea ways, anchorages and ports blighted by this unacceptable crime. Without such accurate and verifiable information, coastal states have insufficient information to make informed decisions to allocate limited resources. Incident reporting is critical as the industry also needs it to fully understand risk. As a trusted non-governmental and not for profit organisation, the IMB Piracy Reporting Centre ensures information on every incident received is promulgated timely and accurately for the benefit of all stakeholders.

Michael joined the ICC International Maritime Bureau (IMB) in May 1994 and closely co-ordinates with the IMB’s shipping, banking, insurance and trading company members with regards to loss prevention and advice. He also works closely with the IMB Piracy Reporting Centre (PRC) based in Kuala Lumpur, Malaysia. The IMB PRC is a single point of contact for the shipping community to report acts of piracy and armed robbery from anywhere in the world. The IMB PRC is regarded as the primary source of information on piracy attacks globally. He has travelled on investigations to many countries, spoken at numerous conferences and seminars worldwide and written papers on areas connected with the subject of piracy, fraud and malpractice in trade finance and international trade. In January 2020, Michael became the CEO of ICC Commercial Crime Services – the anti-crime unit of the International Chamber of Commerce – of which IMB is a part.