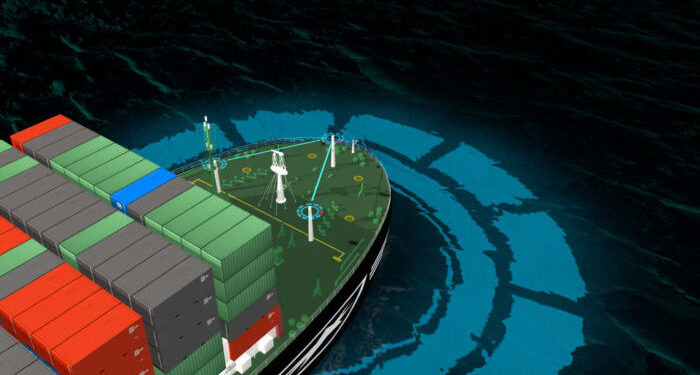 The increasing wave of digitalization has shaped a new future for the maritime world, which seeks to leverage the advantages of technology to boost its sustainability and address its current and future challenges. In line with a growing smart technology trend and as shipping is struggling to keep costs down in order to maintain its competitiveness, as well as to minimize human error to improve its safety record, autonomous ships provide an attractive trend.

While the regulatory landscape for an adoption of autonomous ships seems unclear, the IMO’s Maritime Safety Committee (MSC 100) in December, approved the framework and methodology for the regulatory scoping exercise on Maritime Autonomous Surface Ships (MASS), noting a milestone in the development of the ship autonomy debate.

But the last years have also seen several landmarks surrounding autonomous ships. In 2018, the maritime industry saw the launch of the world’s first autonomous shipping company, resulting from cooperation of Norwegian technology companies Wilhelmsen and Kongsberg, while, earlier in 2019, the 12m-long autonomous boat SEA-KIT Maxlimer successfully transferred a cargo of oysters from West Mersea, UK to Oostende, Belgium. This was reportedly the first commercial crossing of the North Sea by an autonomous ship.

From 2017, Norway as a pioneer in autonomous technology, has opened four test bed areas for autonomous ships, followed by more in Finland and UK. Meanwhile, several states, academic institutions or organizations seem to invest in Research and Development to leverage the full potential of ship autonomy.

Claiming the title of the world’s first test bed area for autonomous ships and validating Norway’s position as a leader in automation, Trondheimsfjorden, Norway’s third-longest fjord at 130 kilometres (81 mi) long, opened for autonomous ship technology testing in June 2017. The agreement among national authorities and the industry and research organizations was signed in September 2016.

In September 2017, the Norwegian Maritime Authority and the Norwegian Costal Administration established a second area for remote control and autonomous ship testing in Storfjord, in the northernmost part of western Norway.

The area has several ferry crossings that are suitable for testing and developing sensor technology and management systems necessary to develop greater degree of autonomy in ships.

In May 2017, local port authorities applied to The Norwegian Costal Administration for a fourth autonomous test-area in Grenland, southern Norway. The area has considerably more traffic than the Trondheimsfjord and Storfjord and will be useful for testing of more developed concepts in a heavy traffic environment. The area has VTS coverage, which will further add to the usefulness of the test-area.

There is also significant maritime industry and research going on in the area and they will get test facilities much closer to home.

In August 2017, Finland also saw its first test area for autonomous ships. The Jaakonmeri Test Area is managed and controlled by DIMECC, the co-creation company leading to the One Sea – Autonomous Maritime Ecosystem.

The Jaakonmeri Test Area is located on the Finnish west coast outside the municipality of Eurajoki and is the first in the world to be globally open to anyone wishing to test autonomous maritime traffic, vessels or technologies related to it.

In October 2018, Thales opened a UK Centre of Autonomy for the development, assessment and certification of autonomous systems at its Turnchapel Wharf in Plymouth.

The UK Centre of Autonomy offers a secure location to conduct a full evaluation cycle for multi domain platforms.

Turnchapel Wharf has an enviable location affording trials teams rapid access to both shallow and deep water. This access will increase actual trials time by decreasing transits and enable progressive trials to be planned around differing sea conditions from sheltered shallow waters to deep open sea.

In the near term, the test area will be restricted to small vehicles (<10 meters) with an expected focus on research and survey vessels. These vessels represent those with the greatest near-term commercial potential and pose significantly less risk than larger vessels.

Beginning with these types of vessels will enable industry, regulators and partners to test operation, safety and other factors on navigable waters of the United States in a controlled environment where they can interact with commercial and recreational vessels in a limited capacity.

The area in and adjacent to the Keweenaw Peninsula Waterway has been identified as an ideal location for this test area as it is currently served by the Michigan Technological University’s high accuracy, real-time, global positioning system (GPS) survey system.

Centers of excellence on maritime automation

In 2013, the Norwegian University of Science and Technology (NTNU) was awarded a Centre of Excellence (CoE) by the Research Council of Norway and now leads the AMOS center of excellence in Trondheim. AMOS stands for “Centre for Autonomous Marine Operations and Systems” and gathers researchers from various disciplines to create a world-leading center for autonomous marine operations and control systems.

Supported by the Norwegian Research Council, AMOS has a wide range of partners, including the Research Council of Norway, Statoil, DNV GL, MARINTEK, SINTEF Fisheries and Aquaculture, and SINTEF ICT. AMOS is also collaborating with leading universities in Scandinavia, Europe, the US, and Australia and is involved in several associated projects.

The vision of NTNU AMOS is to nourish a lively scientific heart in which fundamental knowledge is created through multidisciplinary theoretical, numerical, and experimental research within the knowledge fields of hydrodynamics, structural mechanics, guidance, navigation, and control.

The research results will be used to develop intelligent ships and ocean structures, autonomous unmanned vehicles (underwater, on the surface and in air) and robots for high-precision and safety-critical operations in extreme environments, to address the challenges related to environmentally sustainable and safe maritime transport.

Hosted within the Technology Centre for Offshore and Marine of Singapore (TCOMS), the Center of Excellence for autonomous and remotely operated vessels (CEAOPS) aims to be the national focal point for research and development in Maritime Autonomous Surface Ships (MASS).

CEAOPS seeks to drive research and technology innovation required for the safe and efficient operations of autonomously and remotely operated vessels, as well as vessels equipped with smart maritime systems and solutions, in complex operating environments.

The focus of research is to enable MASS development, such as the sensing and prediction of waves to enable safe and efficient navigation in open seas, more accurate prediction of vessel voyage performance and dynamic assessment of vessel structural health. 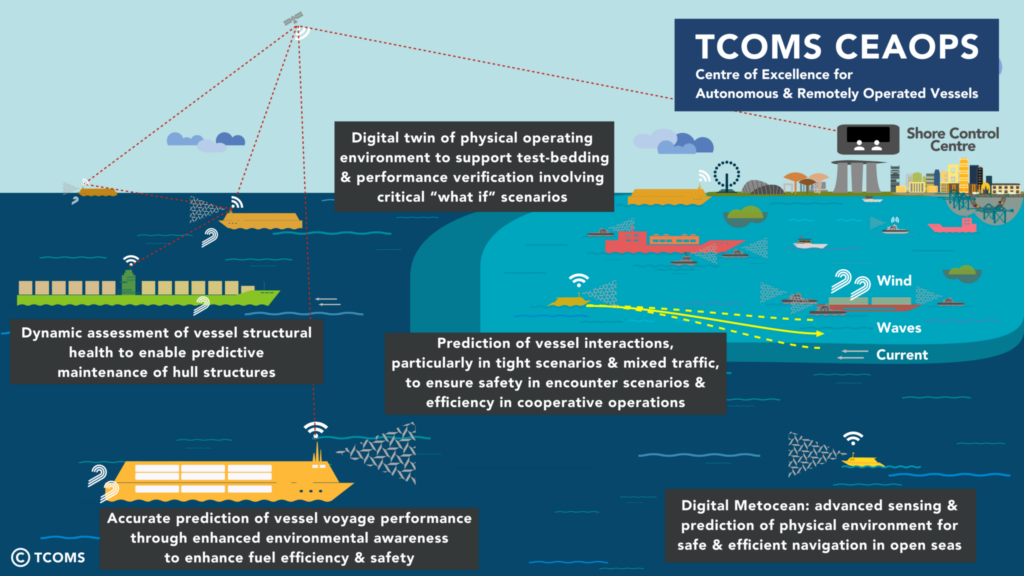 In January 2018, engineering giant Rolls-Royce inaugurated a research facility in Turku, Finland, to develop the technologies that meet the requirements of an increasingly autonomous shipping industry.

Based in Turku, a maritime city with a history of technological innovation, the Research & Development Centre for Autonomous Ships includes a Remote and Autonomous Experience Space aimed at showcasing the autonomous ship technologies Rolls-Royce has already introduced as well as those in the development stage.

The R&D Centre enables Rolls-Royce and its partners to carry out projects focused on autonomous navigation, the development of land-based control centres, and the use of artificial intelligence in future remote and autonomous shipping operations.