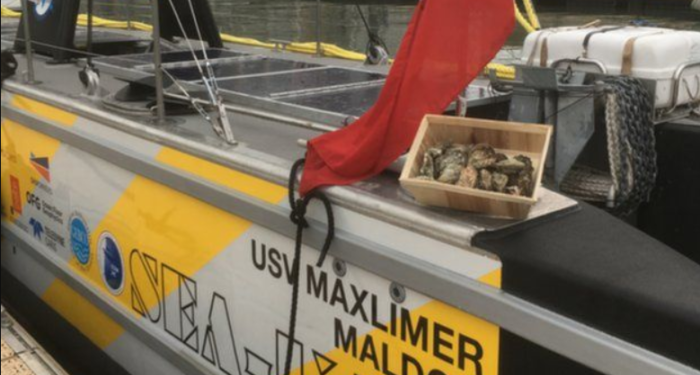 An autonomous boat has successfully conducted a cargo run from the UK to Belgium. The 12m-long SEA-KIT Maxlimer sailed from West Mersea to Oostende on May 6, carrying a box of oysters. In order to navigate safely in one of the busiest shipping lanes, it relied in various technologies.

According to the boat’s owner, SEA-KIT International, this was the first commercial crossing of the North Sea by an autonomous ship. The vessel is able to adapt to numerous tasks, whether that is transit, hydrographic surveys, environmental missions, or marine safety and security.

In order to sail as safe as possible, the ship uses communications and control system known as Global Situational Awareness through Internet. With this technology, operators can remotely access CCTV footage, thermal imaging and radar through the boat. They are also able to listen live to the USV’s surroundings and even communicate with others nearby.

The sail lasted a total of 22 hours, as the ship can move slowly at only a few knots. In addition, it can use and recover a sonar-equipped autonomous underwater vehicle that will collect bathymetric data.

The trip was supported by numerous agencies, such as the UK MCA, the Department for Transport, the Foreign and Commonwealth Office, the European Space Agency, and partners in Belgium.

Speaking at BBC News, Ben Simpson of SEA-KIT International, explained that the vessel can do the same work as traditional vessels but using a fraction of the fuel, just 5%.