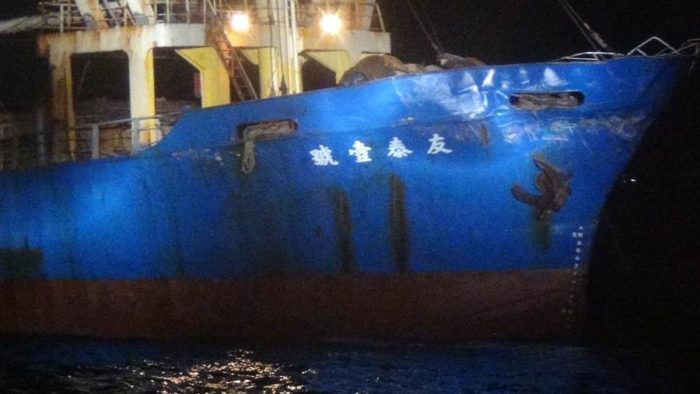 The Taiwanese Coast Guard investigated the incident concerning a Taiwanese cargo vessel that collided with a Chinese navy ship off Kinmen. Fu Shih-hour, the cargo ship’s captain, stated to Bloomberg that the Chinese vessel tried to persuade him sail to the mainland port of Xiamen.

When they arrived, the coast guard told the Chinese captain very clearly that we were in international waters and that we were under no obligation to follow their orders.

He continued that according to the Coast Guard, the Taiwanese cargo vessel wasn't sailing in Chinese waters to obey the orders. Although the Chinese vessel's captain wasn't happy, he had to begrudgingly accept it.

Concerning the incident, it took place on Wednesday, July 31. Up to now, the Chinese vessel hasn't been identified, and at the time of the incident it refused to stop and submit to inspection and turned off the communications with the Coast Guard.

The Taiwanese vessel's captain stated that he was unable to identify the vessel in the dark, as its AIS was turned off.

This was just a simple incident at sea. It shouldn’t be blown out of proportion. Neither of us meant to collide with each other,” he said. “I don’t blame the other captain for not having the AIS turned on because navy ships don’t usually use it. It wasn’t on purpose.

Similar to the unidentified Chinese vessel that didn't further contact with the Taiwanese Coast Guard, another hit and run incident took place in June, when a Filipino fishing boat sank after being hit by an alleged Chinese vessel, in Reed Bank, in the South China Sea.