China to be the largest energy-intensive goods producer in 2040

EIA released three reports in its International Energy Outlook 2018 (IEO2018) discussing the energy implications of potential changes in these economies. The report refers to China, India, and Africa, which are three of the most populated parts of the world, and they collectively consume about one-third of all global energy. In this article, the focus will be on China.

China’s energy consumption, as well as India’s and Africa’s, is expected to grow faster than the rest of the world through 2040. As a result, changes in its economies have significant implications for global energy markets.

The IEO2018 notes that China’s economy remains by far the world’s largest producer of energy-intensive goods in 2040. Faster economic growth in China also leads to higher energy consumption, but the amount it increases depends on how quickly China changes from an export, investment-led economy to a more service-oriented, personal consumption-based economy.

However, currently China is trying to implement a change in its energy consumption. To understand this, we have to go back to 1980–2005. During this period, China had double-digit real GDP growth, and energy demand more than tripled.

However, over the past seven years, its annual economic growth has slowed to the single digits, and the rate of increase in energy demand has also slowed. This recent change is consistent with China’s policy goal to lower growth in energy consumption.

These reductions in energy demand are partly driven by a gradual shift in the economy’s structure from manufacturing toward services, as providing services is less energy intensive than manufacturing goods.

In addition, EIA conducted two high economic growth cases. The report found that in the so-called Fast Transition case, the economy moves away from manufacturing and construction toward services by 2040, which are less energy intensive than manufacturing.

What is interesting, is the fact that China is projected to produce 35% of the world’s energy-intensive manufactured goods in 2040 in both cases. Even in the Fast Transition case, where China’s manufacturing share of domestic output declines, China still has the larger share of world energy-intensive goods production in 2040. 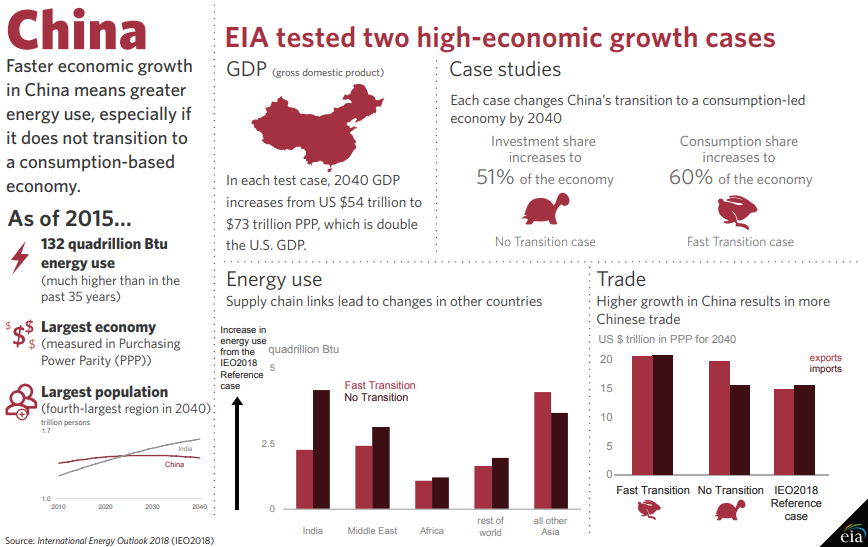