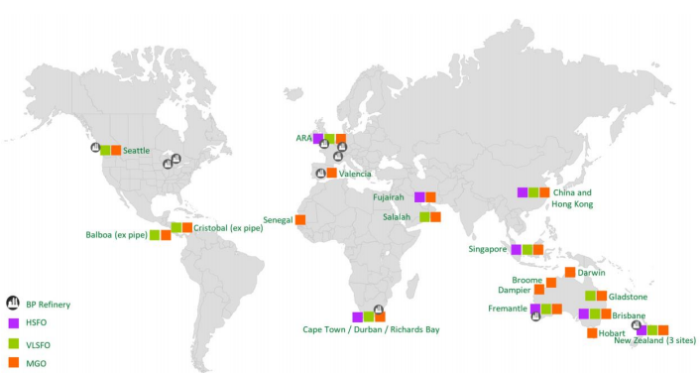 BP Marine announced that it will begin to retail low sulphur fuel that complies with upcoming MARPOL regulations which are limiting the sulphur content of marine fuels. Namely, BP will be introducing the new very low sulphur fuel oil (VLSFO), with a maximum 0.5% sulphur content, after conducting successful sea trials in the Amsterdam/Rotterdam/Antwerp (ARA) and Singapore hubs.

Specifically, BP stated that the marine fuel offer includes this new VLSFO along with marine gas oil and also high sulphur fuel oil for vessels that are equipped with scrubbers. BP also plans to retail the new 0.5% sulphur VLSFO globally.

In order to produce a full range of MARPOL-compliant marine fuels, BP’s refineries have made a number of configuration changes to support the segregation, handling and storage of the fuels.

“BP supports the ambitions of MARPOL to reduce air pollution from ships and we have been actively working with partners to prepare for its introduction. We have undertaken a comprehensive test campaign, conducting ship-board trials of our new very low sulphur fuel. Following the success of these sea trials, and working closely with our customers, we believe we now have a robust commercial offer that will support customers in complying with MARPOL

Except from BP, Shell has also taken steps to address the 2020 sulphur cap. The company agreed with the Dutch tank terminal firm HES International to partially restart the operation of a German oil refinery mothballed since 2011. According to Reuters, HES Wilhelmshaven Tank Terminal is now reinstalling the vacuum distillation unit (VDU) at Wilhelmshaven, with the aim to produce low-sulphur fuels ahead of the 2020 sulphur cap.

The Hainan plant is currently the second refinery under Sinopec to produce the low-sulphur fuel, complying with IMO standards. In fact, during January, Sinopec Shanghai Petrochemical Corp shipped 6,000 tonnes of the fuel.

In addition, Hellenic Petroleum, one of Greece’s biggest oil refiners, informed on February 28 that two of its three refineries are already ready to comply with the 2020 sulphur cap. Specifically, its refineries in Elefsina and Thessaloniki have adjusted to the new rules.

As for the third refinery in Aspropyrgos, which produces high sulphur fuel oil, it will comply with the new rules in November, as some tests will take place in the second quarter, Reuters reported.

Furthermore, the Port of Fujairah announced that a 0.5% sulphur bunker fuel will be available at the port, as early as February 2019 onwards. Namely, Fujairah Refilling Limited has began the manufacturing and production of the first bunker fuel oil with 0.5% sulphur which will be delivered in Fujairah.