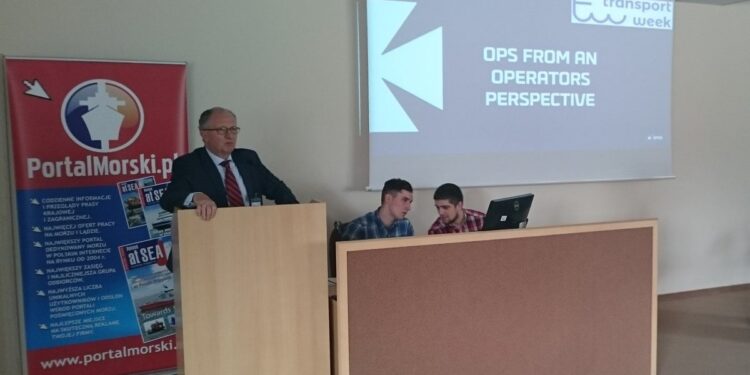 BPO Secretary General, Bogdan Ołdakowski introduced the main environmental developments and challenges addressed by the initiative. He also underlined the importance of the Baltic region as the model region for green ports and maritime transport.

Marcin Włodarski from the MOTUS Foundation, one of the Green InfraPort project’s partners, noted that there is still a significant number of ports without energy policies and that only 20% of the port energy policies developed for the ports target the port as a whole.

As one of the initiative’s key issues and a topic closely linked to energy management in ports, on-shore power supply (OPS) also made an appearance at the seminar, presented from the operator’s perspective by Poul Woodall, Director for Environment & Sustainability at DFDS. He listed the main reasons making OPS an attractive choice, i.e. noise reduction and reduction of GHG, NOx and particle emissions. He underlined that OPS isn’t a one-size-fits-all solution and that some problem need a more specific approach. Nevertheless, OPS remains an answer to a wide variety of different issues, carrying benefits in multiple areas.

Andrius Sutnikas from the Klaipeda Science and Technology Park took the stage next, elaborating on another of the Green InfraPort project’s key – the promotion of usage of LNG as an alternative fuel for ships and source of energy for terminal vehicles. A joint venture between Bomin Linde LNG and Klaipedos nafta to operate a LNG bunkering vessel, planned to supply a truck loading station in Klaipeda and satellite LNG terminals in the Baltic Sea, was used as an example. Delivery to end users via intermodal LNG tanks by trucks, trains and marine barges was also touched upon.

The seminar ended with a presentation by Monika Rozmarynowska-Mrozek, another representative of the MOTUS Foundation, containing a thorough examination of the state of sewage reception facilities development in Baltic sea ports. She touched upon the challenges facing the development process of PRFs, including the issues of various quality of sewage discharged by ships, the overall cost of the infrastructure and the need for improvement in information flow between port authorities and the shipping lines.

The existing system of fees has also been mentioned, with focus on the fact that it needs a more clear definition by HELCOM, currently leaving too much room for free interpretation, leading to ports implementing the system in different ways.