A newly-launched report provides information on the past and present activity patterns in the northern U.S. Arctic and surrounding waters around the Bering Strait, while also projects if the number of vessels sailing in the Arctic region in the future will be increased by 2030, examining four scenarios.

The U.S. is an Arctic Nation, with over 46,600 miles (75,000 kilometers) of shoreline in Alaska, including the Aleutian Islands. Three Arctic seas bound the State of Alaska: the Bering, the Chukchi, and the Beaufort.

Namely, the US Committee on the Marine Transportation System (CMTS) released its report, "A Ten-Year Projection of Maritime Activity in the U.S. Arctic Region, 2020–2030", estimating that 377 vessels could be operating in the region by 2030.

The four scenarios that the Committee examined are:

Each one of the four scenarios provides a different possibility for vessel activity in the northern U.S. Arctic and surrounding waters over the next decade, ranging from annual growth rates of 0.3% to 4.9% and total annual vessel counts of 284 ships to 535 vessels.

The report notes that

In the meantime, the report resulted to the findings below:

Concluding, over the next decade, it is anticipated that natural resource activities in the Arctic, particularly the growth of LNG shipments from Russia and vessels needed to resupply mining operations in northern Canada, will play a large role in the volume of traffic transiting through the Bering Strait.

Recently, to protect the Arctic and the environment, the Arctic Council and the Arctic Economic Council conducted their first joint meeting in Reykjavik to discuss the future of Arctic, marine transportation and blue economy, following comments of the Arctic Circle that although the route has experienced an increased economic growth the last years, it affects population, as many are those who are moving out. 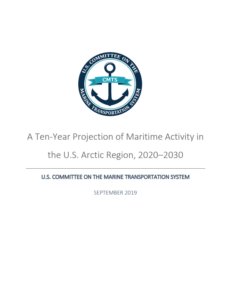