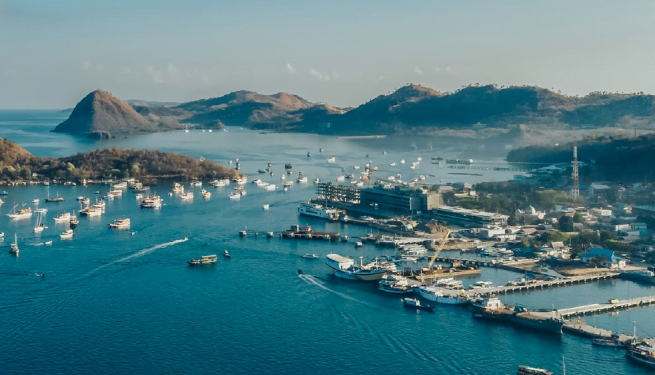 Global Maritime Forum’s new report explores the context and potential for the adoption of zero and low carbon shipping fuels through the shipping sector of Indonesia.

In fact, the “Indonesia: fuelling the future of shipping – Low carbon shipping fuels for Indonesia’s shipping sector” paper notes that the overall infrastructure and supply chains that would be created in the country, could help increase electrification rates and support decarbonization of energy supply, industry and transport.

There is an opportunity for Indonesia to deploy infrastructure to supply zero carbon fuels to vessels which visit its ports. Indonesia’s natural resources, geography, and prominence on important shipping trade routes allows for various opportunities to be taken advantage of that would aid in Indonesia achieving its decarbonization goals and catalysing a low carbon economy.

As infored, about 47% of Indonesia’s Gross Domestic Product (GDP) comes from manufacturing, which relies on the export of manufactured goods across the world to large economies such as China and the United States.

The zero and low carbon fuel options available for adoption by the maritime industry include green hydrogen, green ammonia, green methanol, biofuels and battery power. For Indonesia, the utilization of biofuels in decarbonizing shipping comes as a potentially feasible option in cases where there is a sustainable and consistent supply of bioresources.

Indonesia has strong trading relationships across Asia and North America, as well as all over the world

Indonesia holds a key position along with two of the most important shipping lanes in the world, the Strait of Malacca and the Sunda Strait, making it a possible hub for international vessels passing between the world’s largest economies. For the records, Indonesia’s largest trading partners are China, Singapore, Japan and the United States.

The countrys is a major exporter of coal and crude oil: fuels are Indonesia’s top export commodity by value, with the country previously being a member of the Organization of Petroleum Exporting Countries (OPEC).

Indonesia has set goals to increase electrification as well as increase the renewables contribution to the grid above 20% by 2025.

Currently, fossil fuels make up about 84% of energy production in Indonesia. The country has a limited but diverse renewable energy potential – enough to supply its domestic electrical demand as wellas production of zero carbon fuels for vessels bunkering in its ports.

Adopting zero carbon fuels in its shipping sector could act as a catalyst to achieving the country’s overall carbon commitments thanks to the deployment of renewable generation and the development of supply chains, skills and economies of scale which would support wider decarbonization.

The study has identified that the most suitable options are hydrogen and ammonia for large commercial vessels such as containers and bulk carriers; small passenger and cargo vessels can be supplied through direct and onboard electrification. Along with Indonesia’s insular composition, its shipping traffic capture area, and its regional partners, this positions Indonesia as a key enabler for the decarbonization of the global fleet. Furthermore, this strategic position in the maritime sector allows Indonesia to further advance its ambition in reducing its national carbon footprint.

Overall, Indonesia has a strategic maritime position that could enable the country to become a key-player in the reaching zero-emission shipping by 2050.