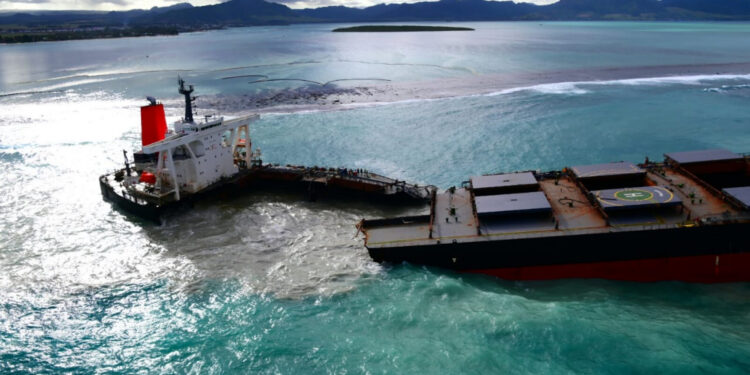 Operations to remove the wreck and all the debris from the Wakashio, off Point d’Esny, were concluded on 16 January 2022.

The final actions of the wreck removal team were to recover sections of ship debris that were lying up to 500 meters away from the site of the stern section.

However, the wreck removal operation experienced many challenges. Namely, the exposed, shallow water, high energy location was difficult for the team and the crane barge to operate at and provided numerous technical challenges.

Nevertheless, once sea conditions allowed, the crane barge and its grab were able to dismantle the wreck and remove the wreck piece by piece.

As the wreck was declared a total loss and the authorities in Mauritius had issued a wreck removal order, the Owners and their protection and indemnity insurer, Japan P&I, turned to Marine Consultants.

In October 2020, bMC was requested by the Owners and Japan P&I to assess the available options, to conduct the difficult task of the wreck removal.

We are pleased that removal works were completed safely after just 30.7 days of crane operations at the worksite

The project suffered setbacks, such as delays in assets arriving work site which pushed the removal into a two-season operation.

What remains now is the shore side dismantling of the scrap metal at the shore base in Port Louis, to allow transportation of the metal by road to a smelting and production facility. The shore side works can be expected to take approximately another month.

The Mauritius people and numerous Island companies have lived and breathed this project with us. Without their support and patience, the job would not have been possible, and I am glad that things can go back to normal now

The bulk carrier MV Wakashio ran aground off Mauritius early in the evening of 25 July 2020, attracting significant media attention for several weeks following the occurrence, as fuel oil started leaking from the vessel in the environmentally sensitive region and adverse weather conditions impeded proper response.

Probable causes – What is known so far

Pending an official investigation report from the respective authorities, MOL has attributed the incident to crews’ overconfidence and complacency. According to the company’s internal investigation, two days before the grounding, on July 23, the vessel changed its passage plan to further reduce the distance from the coast from 5 nm to 2 nm, in order to get a Wi-Fi signal.

According to a report issued by The Institute of Security Studies (ISS) in December, the grounding of MV Wakashio showed, as a general lesson learned, that the activation of a national oil spill contingency plan cannot stop the far-reaching impacts of marine pollution incidents.