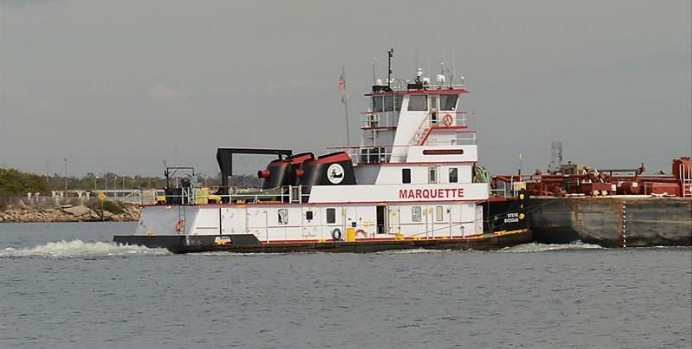 Vessel contact with pier linked to inaccurate labeling of alarms

The US NTSB issued an investigation report on the contact of the towing vessel 'Steve Richoux' with a pier on the Mississippi River, caused by a steering system failure. There were no pollution or injuries, but estimated property damage exceeded $3 million.

On 7 May 2018, about 1848 local time, the towing vessel Steve Richoux with five crew members was downbound on the Mississippi River in New Orleans, Louisiana, pushing six loaded cement barges when a steering system failure occurred.

The pilot and the captain tried to regain steering control of the vessel. Despite their efforts, the Steve Richoux struck the Mardi Gras World pier at mile 98.

The National Transportation Safety Board determines that the probable cause of the contact of the Steve Richoux tow with the Mardi Gras World pier was a loss of steering control due to a recurring yet unreported problem with the vessel’s steering system.

Because of their limited time on board the Steve Richoux, neither the captain nor the pilot knew what the SHIP SERV alarm actually indicated.

The captain’s decision to place the pilot at the helm of the vessel despite the pilot’s lack of familiarity with the vessel prior to transiting the congested waterway increased the risk to the safety of the vessel and crew.

Additionally, the report highlights that, not realizing the cause of the steering failure, both the pilot, who was at the helm, and the captain, who was in the wheelhouse, cycled the steering levers for the flanking rudders hard to port several times in an effort to counteract the effect of the current as it moved the vessel from the river’s right descending bank toward the left descending bank.

Although the alarm listed as “SHIP SERV” activated and was silenced in the wheelhouse, neither the captain nor the pilot realized that its activation meant that the steering system was over-pressurized. Had the alarm been labeled as such, they would have known that the system had a problem.

Had the captain or the pilot understood the cause of the steering failure, they would only have had to move the flanking rudders off the hard-to-port position to regain steering.

Accurate labeling of alarms pertaining to critical machinery and essential systems is crucial so that vessel operators understand the nature of problems or failures. Quickly understanding what specific condition exists allows crew members and/or the operating company to take timely and appropriate action to mitigate or correct the condition. 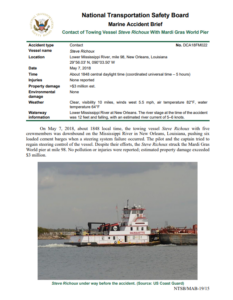