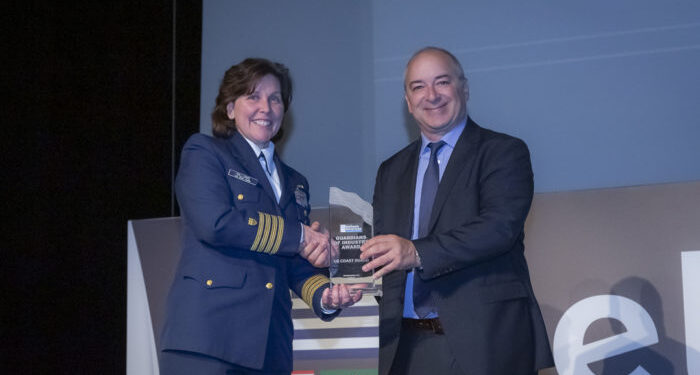 SAFETY4SEA, in collaboration with SHIPPINGInsight, is pleased to announce that US Coast Guard has received the 2019 Hellenic American Maritime Guardians of Industry Award, sponsored by ABS, at a gala dinner and award ceremony which successfully concluded on May 29th at Megaron Athens, The Banqueting Hall, the evening on day one of the inaugural Hellenic American Maritime Forum, in Athens.

USCG received the award for its valuable contribution to ensuring enhanced safety at sea. USCG carries out three basic roles – maritime safety, maritime security and maritime stewardship – and is lauded for its quick responsiveness in a broad range of emergencies. USCG maintains an extensive fleet of 243 coastal and ocean-going patrol ships, tenders, tugs and icebreakers called “cutters”, and 1,650 smaller boats, as well as an extensive aviation division. According to statistics, on an average day, the USGC will conduct 109 SAR, save 10 lives and assist 192 people in distress.

This honor recognizes someone who has made a huge and personal sometimes contribution to the safety of the maritime industry.

I gratefully accept this award on behalf of 40.000 members of the US Coast Guard, active, duty, and civilian.

In 1958, USCG launched AMVER, a unique system which provides important aid to SAR efforts globally. USCG has also established an Academy to prepare the future Coast Guard officers. In 1986, USCG established the Marine Safety Center (MSC) to support the people and objectives of the Marine Safety, Security, and Environmental Protection programs. USCG has introduced QUALSHIP 21 & E- Zero programs to reward vessels for their commitment quality, safety and the environment. Recently, USCG played an important role to El Faro’s investigation, revealing several challenges in the industry’s safety framework. In this context, USCG issued a Final Action Memo outlining safety improvements. USCG screens vessels prior to arriving in US ports and assesses a multitude of regulatory and risk-based factors in order to determine foreign vessel examination requirements According to PSC Annual Report, in 2018, USCG conducted 9,025 SOLAS safety exams with a total of 105 detentions. Also, USCG conducted 8,140 ballast water and identified 119 BWM deficiencies

Other winners of the 2019 HAMF Awards are: Star Bulk Carriers Corp. for the Dry Bulk Operator Award, Viswa Lab for the Innovation Award, Panama Maritime Authority for the Maritime Centre Award, Wärtsilä for the Investment in Shipping Award, Mrs. Angeliki Frangou, Chairwoman & CEO, Navios Group, for the Visionary Award, Mr. Nicky A. Pappadakis, Past Chairman of Intercargo, for the Maritime Advocate Award and Adm. (USCG Ret) Thad William Allen for the Lifetime Achievement Award.