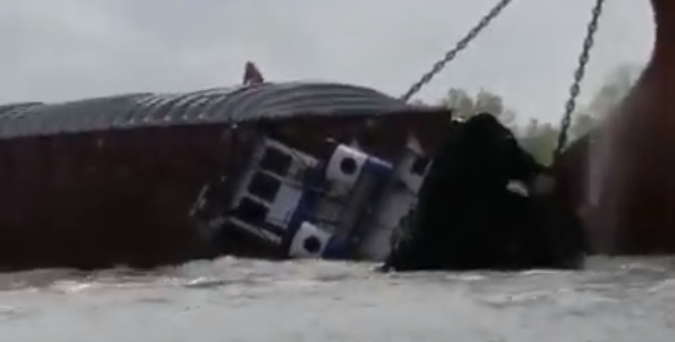 The towing vessel 'Michelle Anne' sank at Baton Rouge General Anchorage, Mississippi River, while pushing an empty dry cargo barge, on 14 March 2019 / Above image is used for illustration purposes only

In its latest Shipping and Safety Review, Allianz discussed how the changing weather patterns observed in the last years are disrupting supply chain, resulting in physical damage shipping incidents. The report cited recent examples, such as record low water levels on the Rhine and Elbe rivers and high water in Mississippi.

In late 2018, Europe marked record low water levels on the Rhine and Elbe rivers, leaving cruise ships stranded and inland ports idle as millions of tons of goods were switched to road and rail transport.

The low river levels disrupted supply chains in Europe’s industrial heartland, affecting the movement of goods such as petrochemical and coal, driving up freight rates and commodity prices.

Some manufacturers and refineries were even forced to cut production due to shortages.

The problem resurfaced on the Rhine in April 2019, with cargo vessels unable to navigate much of the river when fully loaded.

The issue is not only seen in Europe. At the same time, the Mississippi River in the US, which is used to move some 175 million tons of freight each year, has also been experiencing erratic conditions.

The Mississippi’s high water season typically runs from December until May. In March 2019, some 80 vessels were forced to queue at the mouth of the Mississippi River due to high waters and flood levels.

High water levels can cause various problems for ships on inland waters, resulting in unexpected draft restrictions, restrictions on navigation, lock closures, additional berthing and pilot services, leading to delays and extra expense. High waters can also result in towing events and collisions with other vessels, bridges or port infrastructure.

Extreme weather is contributing to losses right now. As a result of changing weather patterns we have seen a number of incidences in the US and Europe, including groundings and collisions, from unseasonal high waters. For example, in the past, high water conditions on the US inland river system followed a welldefined annual schedule. This is no longer the case. We are seeing higher river levels for longer periods of time. This has led to disruptions in shipping schedules, cargo and hull losses, as well as the loss of human life,