Low water levels on Rhine are are causing a continuous problem for the European commodity markets since summer. This led many refineries and industrial plants to reduce production, and in some cases to declare force majeure, Gibson reports.

According to Gibson, in October, depths at the key measuring point of Kaub reached a record low of 25cm and have shown little  improvement since then. Such low levers are affecting the local barge market, as well as the Amsterdam-Rotterdam-Antwerp (ARA) trading hub and beyond.

In the beginning of this situation, ARA stocks increased, as shallow waters caused barges to reduce cargo loads. It is interesting that in some cases, loads were less than 20% of potential loading capacity. Moreover, local media reported that movements on the upper Rhine have all but stopped, significantly impacting industrial activity. 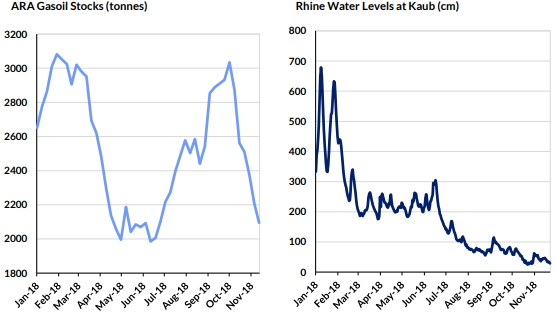 What is more, middle distillate stocks should be higher ahead of winter, especially due to the inability to get products up river. However, they have decreased by almost 1 million tonnes since October.

In addition, lower imports, re-exports and diversions away from ARA have driven lower stocks, indicating a continuing logistical issue and a problematic gasoil market.

Examining the Rhine situation, meteorologists say that rainfall will remain limited for the next month or so. This means that water levels could further decrease.

Nevertheless, when the rains return and water levels rise again, buying activity into the ARA hub will increase as well, especially if stocks continue to reduce the coming weeks.

The rise in demand could lead into a more solid product tanker demand and could boosto distillate flows from the US Gulf, Baltics and Middle East into ARA. Nonetheless, in order for this to happen, the report says that we should not see too much competition from newbuild crude tankers trading product into Europe from Asia.

You may see more details in the following PDF