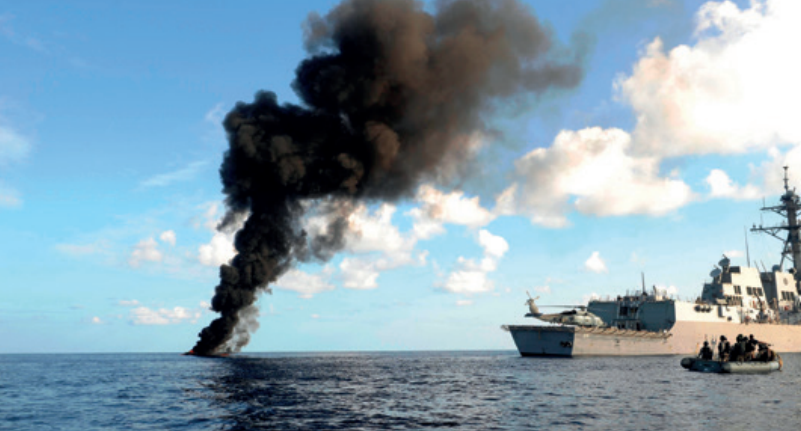 Allianz: Total shipping losses for 2018 were the fewest in a century

In 2018, the maritime industry saw the number of total shipping losses of vessels over 100GT falling significantly to 46, representing the lowest total this century, said Allianz in its new Shipping and Safety review 2019. To put it into context, there were 207 total losses reported in 2000. Cargo vessels were the ship type involved in a third of losses (15) during 2018. 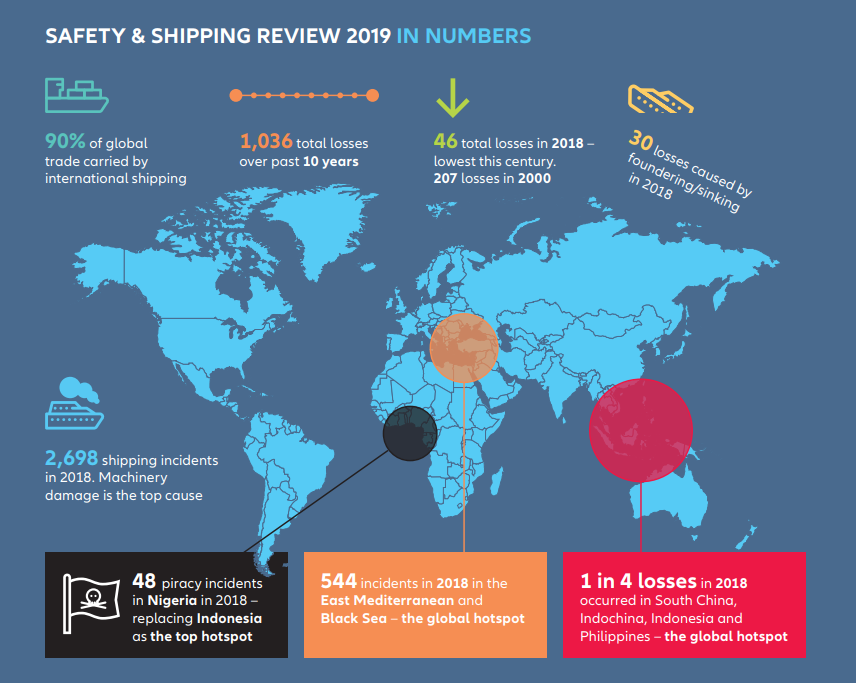 Improved ship design and technology, stepped-up regulation and advances in risk management and safety are driving the sector’s longterm loss improvement. More robust safety management systems and procedures on vessels is also a factor in preventing breakdowns, accidents and other mistakes from escalating into total losses.

Risks in the spotlight

-Larger vessels bring bigger losses: Insurers have been warning for years that the increasing size of vessels is leading to a higher accumulation of risk. These fears are now being realized as evidenced by the growing number, and cost, of incidents such as fires on large container vessels; major losses on car carriers, which average two a year; engine failure; and even the loss of cargo overboard, all of which are potentially offsetting safety and risk management improvements.

-Cargo and fire risks mount: Fires and explosions on board continue to generate large losses with an incident occurring every 60 days on average. Fire activity increased in 2018 with 174 reported incidents – a trend which continued through early 2019. Misdeclared cargo, including incorrect labelling and packaging of dangerous goods, is believed to be a root cause of a number of fires and is a problem exacerbated by larger vessels, which can make issues more difficult to detect, locate and combat. However, a growing number of ship owners are taking innovative steps to address the issue of misdeclared cargo.

-Emissions cap challenges shippers: 2020 sulphur cap is likely to be a game-changer for the shipping industry with wide-ranging implications for cost, compliance and crew. Insurers are concerned about a potential increase in the frequency and cost of machinery breakdown claims following the introduction of low-sulphur fuels if the transition is not well-managed. There are also worries that the increased cost of such fuels may lead to cost savings in other areas, such as crew training or maintenance. There is also potential for disruption and delays to voyages if there is a lack of compliant, compatible fuel at a bunker port

-Unpredictable climate brings new loss scenarios: The changing climate is opening up potential new shipping routes in previously hard-to-access areas such as the Arctic, which brings concerns about the rescue and salvage challenges an incident involving a large vessel in a remote location would bring, as well as the potential environmental impact. There were 46 reported shipping incidents in Arctic Circle waters during 2018.

-Trusting technology: The growing use of connected technology in the maritime sector is a positive for safety and claims. Electronic navigation tools, ship-to-shore communications and the greater use of sensors have the potential to improve navigation and help avoid incidents. Sensors can also reduce machinery claims through performance monitoring and early intervention and help mitigate cargo losses. Yet, at the same time, accidents continue to happen due to overreliance on technology – even down to crew members being on their phones when a loss event occurs.

-Automation, crewless ships and the bottom line: Progress continues to be made in the area of autonomous shipping, particularly in coastal waters and with smaller vessels and it is anticipated that such developments will improve shipping safety. While there will be incidences where technology and automation will remove crew from hazard, innovation should not be driven primarily by efficiency and accounting. As ongoing issues with large container ships and fires and misdeclared cargo show – innovation and technology is not a panacea if the root cause of incidents and losses is not addressed.

-Identifying cyber exposures: Technological advances also means cyber losses will be an increasing feature of marine claims going forward. Companies are responding with an uptick in cyber security assessments while some insurers are looking to clarify so-called “silent” exposures. More contingency planning and stress testing of systems needs to be done to combat a growing number of loss scenarios, such as extortion.

-Security threats evolve and challenge: Political risk remains heightened around the globe and increasingly poses a threat to shipping, trade and supply chains through conflicts, territorial disputes, cyberattacks, sanctions and, of course, piracy. Piracy incidents increased over the past year, with Nigeria replacing Indonesia as the top global hotspot. Nigeria, specifically Lagos, is also the location of the highest reported number of stowaway incidents – a long running problem for ship owners, which is now also challenging commercial vessels, driven by the ongoing migrant crisis. Stowaways and migrant rescues at sea can have serious consequences for ship owners, causing delays and diversions and putting crew members under pressure, while repatriation is a complex procedure. 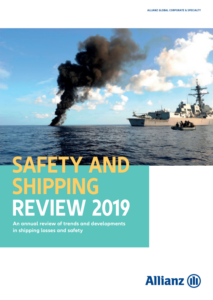