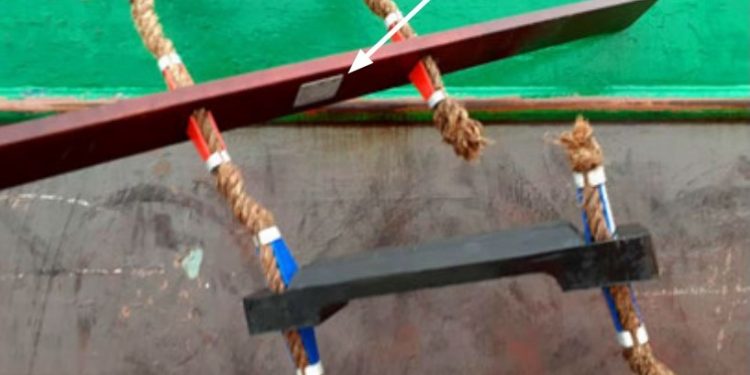 On the occasion of the Maritime Safety Week (July 4-10), UK MAIB’s inspector Bill Evans refers to the issue of unsafe pilot ladders, a concern that has been regularly voiced by the industry.

In 2021, the branch received almost 200 reports about substandard pilot ladders. Of those, 87% of the ladders were rigged incorrectly and the remainder were observed by the marine pilot as being materially defective. Fortunately, serious accidents have been rare, but the potential for injury and even loss of life clearly exists.

Mr. Evans says that marine pilots play a critical role in the safe operation of any harbour, where they guide almost every vessel in and out of the port. However, while the size and technological complexity of ships has increased, marine pilots still embark and disembark moving vessels by using a rope pilot ladder.

The pilot transfer is a hazardous operation, so it is absolutely essential that these ladders are correctly rigged and their use properly supervised by the crew.

Discussing about the things to look out for when inspecting the safety of a pilot ladder, he mentioned that the crew must inspect the pilot ladder before and after its use to verify that it is in good condition.

He then continued saying that to rig a pilot ladder correctly, it must be secured to strong points on the ship’s deck by a rope stopper attached to the ladder’s side ropes.

Some of the reported incidents of substandard rigging have included the use of shackles or guardrails, which should never be used to secure the ladder. When a combination of accommodation and pilot ladder is being used, the lower platform of the accommodation ladder must be horizontal and secured to the ship’s side so that the pilot can safely transition between the two.

….Mr. Evans said, adding that on some larger container vessels, a trapdoor arrangement is used, in which case the pilot ladder must extend above the platform to ensure that the marine pilot can safely transfer.

It is imperative that the pilot ladder is supervised by a qualified officer when in use, ready to take action if things go wrong. The ABP poster (see below, click to enlarge) is an excellent guide as to what is acceptable and what is no

The three most important points for someone who has a pilot ladder are:

#1 inspect the pilot ladder before and after use
#2 ensure it is well lit and rigged correctly
#3 supervise its use, with a suitably qualified officer at the embarkation point who is in direct communication with the bridge and has lifesaving appliances close at hand, ready to respond if something goes wrong.